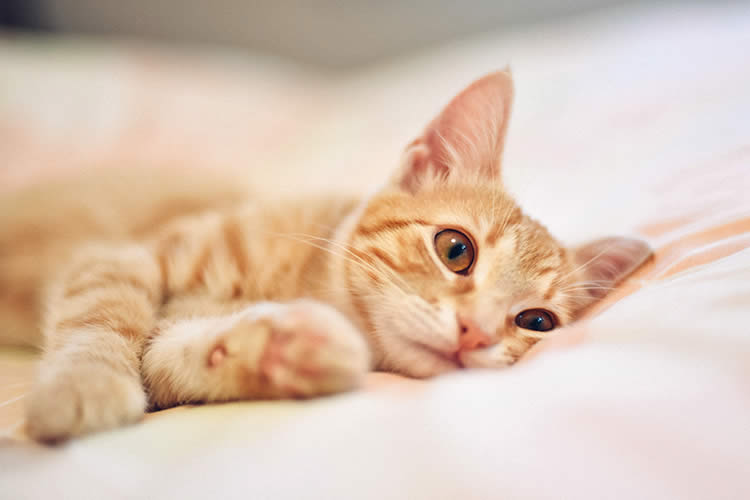 I’ve had personal experience on this topic, when I nursed three kittens who I named Zelda, Navi, and Link. I rescued them when they were just under a week old, and cared for them until they were all adopted at 9 weeks of age (fortunately by the same family). Link was the runt of the litter, and easily half the size of his siblings his entire kitten-hood. He is now 4.5 months old, but his adoptive parents report that he still likes to suckle their fingers!

Your cat may have lost her mother too early in its babyhood. My little trio had been orphaned when they were 5-7 days old, which was much too early to be separated from their mother. While Zelda and Navi displayed independent characteristics, Link was needy throughout my fostering of him. Because Link was the runt of the litter, losing his mother so early in his life had a much more pronounced impact on his behavior. He would suckle his siblings’ belly area, but as I would not permit this behavior, he then used my fingertip as a substitute. I obliged him in this need, because it was clearly not compulsive or harmful. Additionally, it seemed to be a way of expressing his pleasure, as he would simultaneously purr. He was also becoming emotionally attached to humans, which is an important factor when adopting out domesticated animals.

Your cat may have been weaned too early. With my aforementioned kittens, I dragged out the weaning a bit long, because my estimation of their age might have been incorrect by a couple of days. Furthermore, I wanted them to have the best nutritional advantage as orphans. Link was obviously conceived well after his larger siblings, so I was conscious of being certain they had hit the 6-week mark before I weaned them. Even though Link still suckled after weaning, I had no difficulty in getting him off the bottle.

Should You Be Alarmed?

I was never alarmed when Link exhibited his suckling tendencies, only concerned when he was suckling the bellies of his siblings. My concern was not over the behavior itself, but that the suckling would bring about sores on Zelda and Navi. I gently discouraged the behavior, but realized he would need a substitute – which was my finger, as you already know. He would fall asleep with my pinkie in his tiny mouth, purring away his contentment. Link has become more bonded to humans as a result, which is most assuredly a positive outcome.

What may be worrisome is if your cat is suckling so obsessively, that she causes injury to herself or your other pets. Another cause for concern is when your cat suckles unsafe objects that can get lodged in her throat or intestines. Otherwise, just chalk this up as a nuance of your precious pal. She is going to be your baby for her entire life; suckling on her human companion makes her feel happy and comforted. She lost her mother too early in life, so she sees you as the surrogate. Many people would pay dearly to have a more attentive cat, so be thankful that you have one!

References:
Catster.com: If Your Cat Suckles Himself (or You), Is That a Bad Thing?
The Nest: Cat Health – Why Do Adult Cats Suckle?