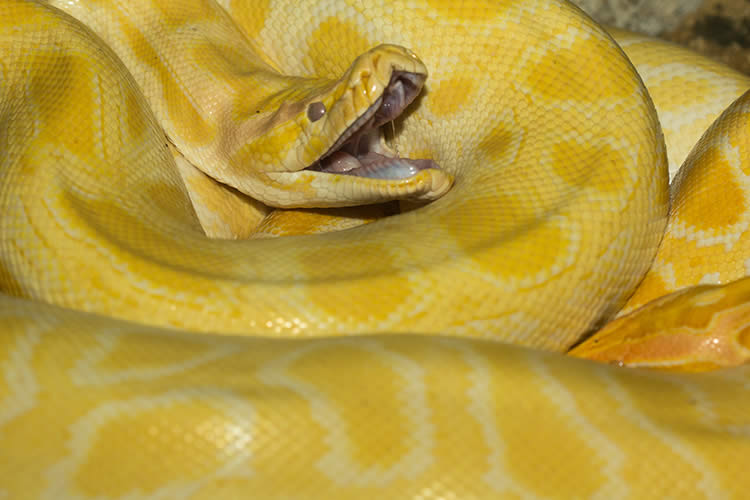 You may look at a snake yawning and say (if you’re a snake lover), “Awww, that’s cute!” You may want to adjust your eyesight and take a good look at the snake’s middle section for a bulge because a snake will yawn specifically after a meal – to realign its jaws (prior to falling asleep in the recliner). The snake’s jaw alignment is needed when the size of the prey is larger than the size of the snakes head.

Alignment Is Usually Harmless But…

The jaw aligning is usually harmless but if this action turns into something repetitive, then you may have to take a closer look at what may be irritating your snake. Incidentally, when the snake aligns its jaws, the jaws are not unhinged as popularly believed. The snake’s jaws aren’t attached by bone but by ligaments which allow one side of the jaw to move freely from the other side.

Snake yawning is also called “mouth gaping” and even though it is used for meal preparation by jaw stretching and fang realignment, yawning is also a method the snake uses for detecting chemical cues from its environment. Above the roof of a snake’s mouth is the “Jacobson’s Organ” (also known as the vomeronasal organ). A snake will open its mouth wide and flick its tongue which will then brush against the roof of its mouth where chemical contact is established and scents are transferred and interpreted. The snake can then tell what prey is near.

Jaw yawning, if repetitive, can warrant concern because this may be a sign of disease since snakes are often inflicted with diseases relating to the type of prey they devour. Fungal or bacterial infections in a diseased rat for instance can be deadly if devoured by a snake. If the hosts’ larvae results in a parasitic migration into the snakes tissues, infection will occur.

If your snake appears ill, never second guess what is causing the ailment.  Consult your vet immediately because disease causing organisms can mimic symptoms relating to other illnesses. Tests will then be made and proper medicine dosages will be administered according to your snake’s body weight.  So it’s always best to call your vet and forgo the hiss(ing) fit!