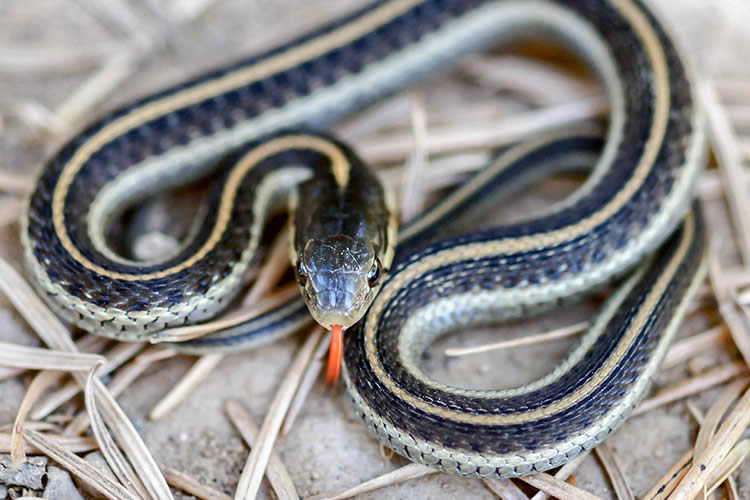 A snake’s hiss is a mode of defense snakes use in order to evoke fear into their attackers. And, may I add, this hissing tactic usually works well for the snake. Keep in mind that a snake is apt to be more afraid of you than you are of it (however, my wife would disagree on this point)!

Why Hiss at All?

Snakes have developed a number of defenses to protect themselves against a variety of animal attackers. A snake’s defenses range from biting (some are venomous; others are not), expelling musk, and frightening away their attackers by using their sheer size (like the Anaconda and Boa). Most other snakes depend entirely upon their hiss as their best defense tactic because it makes them appear much larger and more dangerous to their attacker than they really are – but if hissing fails there is always the other simple tactic of fleeing.

What Is the Glottis?

No, the glottis is not another snake species. The glottis is an organ in the throat of the snake through which it breathes. The glottis opens and closes to control the flow of air through the snake’s throat. By forcibly expelling the air the snake can change what is usually a quiet process into a much noisier process and thus create the hissing sound with which we are so familiar.

The snake’s hiss isn’t for communication with other snakes. The snake usually isn’t a social animal except for breeding purposes and group hibernation. They have a tiny ability (if any) to hear airborne sounds although the King Cobra has been known to emit low high pitched growls for some unknown reason. These sounds are created differently and are heard not through the air but are carried through the substrate.

To Hiss or Not to Hisssss…

Very small snake’s rarely hiss as it’s best suited for larger snakes especially when used as a defense mechanism and for intimidation. Some of the best hissers in the world are the Pine snake and Hognose snake.

The Pine snake (and their relatives) have physiological adjustments that push them to the front of the class where hissing is concerned. The Hognose snake falls into the same category. It’s also important to note that these species engage other defense mechanisms such as striking and displays which visually exaggerate their body size! Other hissing serpents found in North America include the Cottonmouths, Bull snakes, and Gopher snakes.

Use some caution if you happen chance a meeting with a hissing snake. The snake is warning you not to approach! Slowly back away to give the snake some distance. Using caution and judgment may just save you from a snakebite and a trip to the hospital. I was bitten once (when I was a child) and it was a very unpleasant experience. I was fortunate because the snake wasn’t poisonous. I never messed with a hissing snake again!

References:
Pets on Mom.me: Purpose of a Snake’s Hiss