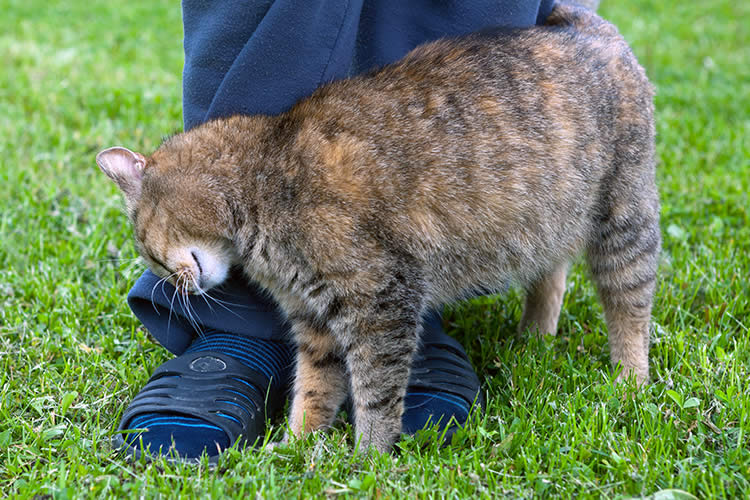 If you think your cat bumps his head against you because he loves you, then…congratulations! He loves you! The behavior is called head-bunting or head-bumping as headbutting is usually a more violent means of attack. Even though most of us like to fancy that our cats adore us, this ritual, whatever it is called, is incontrovertible proof of his fondness.

Physiological Reasons Behind the Behavior

Just like most animal behavior, there is a practical purpose behind head-bunting. Felines like to rub heads with others in their group which spreads the scent among the members. This is a way to ensure all cats in the group smell the same, thereby being identifiable as members.

When a cat bumps his head against you, he is depositing his own scent and his pheromones on you. While the gesture is to show his affection for you, it also is meant to convey to other animals that you are his person. Your cat will bunt you anywhere on your body – your outstretched hand, your exposed leg, even your face. Perhaps you’ve gotten a dose of cat hair when he bunted you in the mouth! Although humans appreciate that you wash with soap and shampoo, your cat likes the smell of himself on you more!

The Sociological Aspect of Headbutting

If you live in a household with more than one cat, you will probably notice that not all the cats bump you with their heads. You can easily tell who is the top cat in the household – this is the cat who will bunt. It is also an invitation to you. He is telling you, “Now is a good time to cuddle me!” Take advantage of the invitation – we don’t often get the chance to hug our cats!

Each cat gesture means something different. Bunting is very special – its primary purpose is to show affection and inclusion. You are a member of his pride. Don’t mistake bunting with other behaviors – which may or may not have anything to do with love.

Cats like to show their butts to you. Sometimes they will present their derrieres when you are petting them. This is a sign that your petting is making him feel very nice. Maybe he jumps on your lap and turns his anus to your eye level. What does this mean? It means simply that he trusts you and he is showing you the part of his body that is usually meant for introductions between felines. While you won’t be sniffing his anus, give him a gentle stroke on his back near his tail or on his hind legs. This will be enough to show him that his gesture is appreciated.

Cats often rub their wet noses on your skin. For me, it would only produce an itchy red spot and rash on my skin. For them, it is literally a sign of nosiness! They use their noses to explore where you’ve been or what animals you’ve been cheating on them with. It can also be a greeting to their housemate but the wet nose is used more for investigative purposes.

Even the most obstinate and recalcitrant cat will show his human his affection by a head-bunt occasionally. If you’re not getting the ultimate symbol of cat approval, perhaps you’re being too needy! Remember, cats are masters at detecting desperation. Give him his space, ignore him for a bit, and act like you don’t see him. After a week of the cold shoulder, he should come around with regular bunting, nosing, and butt-presenting!