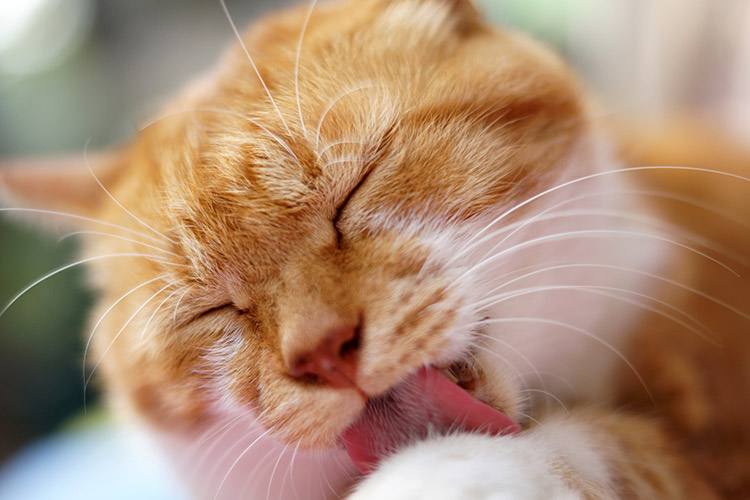 Cats are meticulously clean. When they’re not sleeping or eating they can usually be found in yoga-like positions licking themselves down. They can spend almost 50% of their waking hours just grooming themselves! It’s almost a ritual for them – they have an order to their grooming habits. It’s easy to understand why they like to be clean but they are almost obsessive about it.

It’s Not Always About Cleanliness

Grooming has many purposes for cats. Often it’s about being comfortable or healthy.

Momma cats routinely lick their babies. This is a way of stimulating them into urinating and defecating. As unappetizing as it sounds nursing cats will lick away the urine and feces to keep their kittens clean. Licking comforts their young until they are mature enough to groom themselves.

Cats spend a lot of time grooming. If you notice your cat paying attention to one area, start taking note. This can lead to sores. It’s important to determine why she is going after a specific spot.

Overgrooming may come from anxiety. Has anything in your household changed recently? If your cat doesn’t feel comfortable in her own home, grooming may be a way to deal with the changes.

Parasites are also a cause of overgrooming. Fleas, for example, tend to cluster in certain areas on your cat’s body. If you think fleas might be the cause, immediately apply a high-quality flea ointment.

Your cat might simply have itchy skin or an allergy. There are groomers who provide services for felines, too! We are conditioned to believe that cats never need to be groomed. The groomer will give her a nice, calming bath, a brush-down, and nail trimming. Regular professional grooming will help take the burden off your kitty’s paws as well as preventing hairballs.

Since cats live to groom themselves insufficient grooming is a worrisome thing. When you notice your cat’s fur getting dull and matted it’s a sign that she is ailing. While a vet trip is in order, you can in the meantime have her professionally groomed so that she is feeling her best. When cats aren’t clean they don’t feel comfortable.

Side Effects of Your Cat’s Grooming Habits