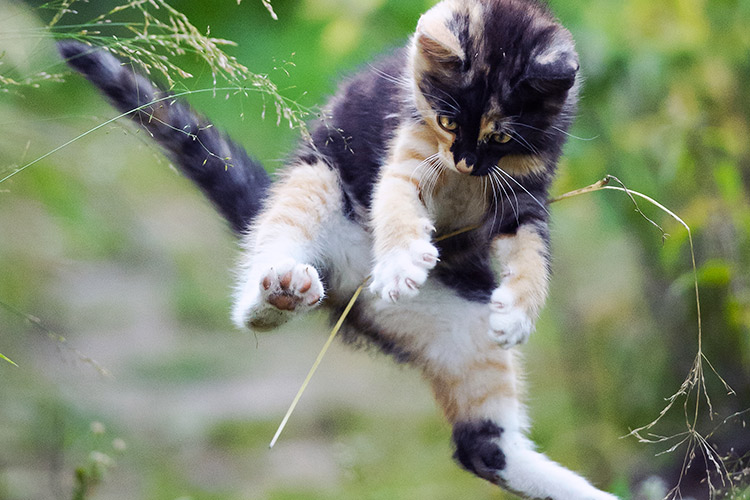 The agility and reflexes of cats have always intrigued me. I’ve often wondered how a cat, dropped from a certain height, can always land upright? Well, the answer is it all begins at an early age with…

The cat’s incredible ability to right itself from falls so it lands on its feet is called “The Righting Reflex.” At 3-4 weeks old, this reflex begins to appear and it matures and is perfected around 6-7 weeks old.

The Righting Reflex is aided also by the cats physique. Cats have unusually flexible backbones and a not so functional collarbone. The height of the drop where a cat could safely survive would be about a foot (30 centimeters) but there have been instances where cats have survived from much higher drops! What’s amazing is that cats without tails also have this reflex because the cat relies mostly on how it moves it’s hind legs and uses its angular momentum in order to set up and complete its landing. The cats tail is not implemented for this astute feat!

Other factors that reduce damage from a fall which factor with the cats Righting Reflex (in order to reduce their terminal velocity) are a cat’s small size, their light bone structure, and thick fur. These come into play during a fall when a cat spreads out its body to increase drag. If you figure it out, an average size cat with extended limbs will achieve a terminal velocity of about 60 mph, while an average size man will reach a terminal velocity of 120 mph! You know what that means, don’t you? The chance of survival for that man is increasingly less than that falling cat! A cats survivability is increased because cats can orient their limbs during a fall at maximum velocity which results in the impact being distributed more evenly throughout the cats body.

Cats do not always land uninjured, however, after a fall. They still may break bones or even die from higher, extreme falls from high buildings as stated in a 1987 study published in the “Journal of the American Veterinary Medical Association.” Cats that have fallen from buildings and were brought into the New York Animal Medical Center were found to have increased injuries depending upon the height of the fall (up to seven stories) but decreased injuries above seven stories – reasoning that after a five-story fall and terminal velocity had been reached, the cats then relaxed and spread their bodies to increase drag. A 2003 study disputed that claim stating that “Falls from the seventh or higher stories are associated with more severe injuries and with a higher incidence of thoracic trauma.” The physics are fascinating but it’s best to avoid situations where a cat could be susceptible to high falls!