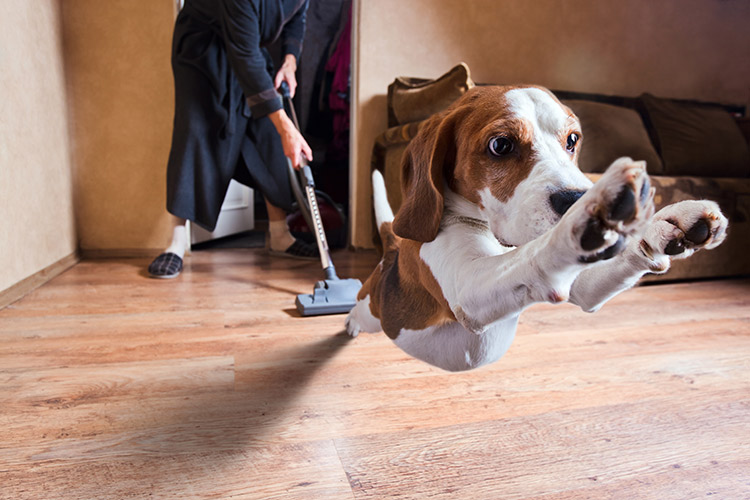 It’s either heart wrenching or comical to see our beloved dogs in fear of something that we know to be innocuous. It seems each dog has developed a personal fear of different inanimate objects or sounds in nature. A famous internet pit bull, Stella, was once deathly afraid of pineapples! Why does this happen and can we prevent it?

Dogs commonly are afraid of loud sounds. They have a highly developed sense of hearing so anything with high frequencies or decibels will cause a dog discomfort. This is the case against using behavior modification objects emitting high-frequency sounds; many dog-lovers feel it is unnecessarily cruel.

Vacuums are extremely loud to humans so it only makes sense that they are frightening to dogs. The movement of a vacuum only exacerbates the situation. And then there’s the way we use them – we run them around the floor at a rapid pace, zigging in, out, and around our dogs’ comfort zones. To a dog this movement could mimic large animals that had preyed on their wild canine ancestors.

Surely you have noticed that dogs cower during thunderstorms and fireworks. They seem to equally detest hairdryers and loud noises on TV. We can safely conclude that dogs are scared objects that are associated with loud noises. So…is there where the fear of balloons comes from? While the innocent balloon seems like a party favor to us, a dog could have a very different perception. Perhaps, in the past, a balloon popped in his face very unexpectedly. You have to admit a popping balloon can be quite disturbing to those of us able to intellectually understand the cause! The sound is unnerving.

There are other random objects that seem to send dogs in a tailspin. Take, for example, the aforementioned, Stella. The adorable and cowardly pit bull has developed a phobia of pineapples. According to Stella’s dog-parents, there’s no particular reason why Stella should have developed a fear of pineapples.

If dogs develop phobias, the best way to help them is the same way we’d help a person to overcome it. We show them that the object or circumstance is not inherently dangerous. Desensitizing can be effective but it is a long process. It involves inserting that object of fear in his everyday life in such an unobtrusive way that it becomes a normal part of their routine and surroundings. Another way of desensitizing your dog is to constantly reinforce that the object cannot hurt them. Vacuums are a major source of fear for most dogs.  keep the vacuum in the near vicinity of your dog. Don’t turn it on; just move it around your dog. After your dog becomes accustomed to the vacuum’s presence, then power it up. It will startle your dog at first, yet as your dog becomes accustomed to the vacuum and to the noise it makes he will feel less afraid.

From an observational standpoint, it seems that dogs who haven’t been properly socialized develop strange phobias. When dogs are kept in solitary confinement and are not exposed to the world everything is new to them. To conquer fear created by isolation try to get your dog out in the world. Do this slowly and naturally. First it may just involve your dog running around in the fenced yard. Then it might involve putting your dog on a leash and running around with him in the neighborhood. The last step might be having your dog around trusted people or taking him to the dog park. Think of how it would feel for a human being to move from the isolated country to the big city. This is very intimidating!

Dogs and Humans – Not So Different!

Dogs most likely develop phobias in the same way people develop phobias – by chance or because of a bad experience. Sometimes, we just don’t know why we have developed an unnaturally magnified fear – it may be something we just came by, or it may be related to an aversion created by a negative experience. Whatever the basis is, we’ve somehow learned to associate danger with specific objects or circumstances. It just seems certain that dogs might be the same way.

References:
Huffington Post: Dog Afraid of Pineapple
American Kennel Club: Common Fears and Phobias in Dogs and How to Help Treat Them
Canidae: Do Dogs Get Scared, and What Scares Them?