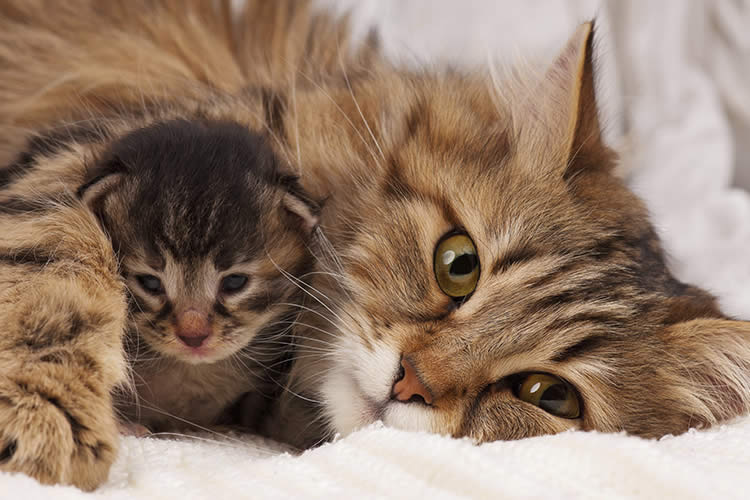 Kittens usually begin the weaning process around 4 weeks of age, according to the general consensus. However, anywhere between the 4- to 6-week mark is acceptable. Weaning a kitten who still has her mother is quite different from weaning a kitten who has been orphaned. A mother cat will instinctively know how to wean her offspring, but humans may not be as attuned to the signs that the kittens are ready to eat solid food. Additionally, the kittens will be resistant to weaning, which makes us feel bad for taking away the bottle!

How Mother Cats Wean Their Offspring

Much like ripping off a band-aid, mother cats simply push their kittens away. If the mother has been producing enough milk for her offspring, she will take over weaning. If you have had to supplement their diets during the nursing phase, then you will also have a bigger role to play in weaning them.

Watching over a cat and her litter has its advantages, though. You will be the nutritional provider, so that the mother does not have to hunt for her wee ones. Although they may be pouty for a day, don’t be discouraged – they will soon start eating from a bowl.

How Can You Tell When to Begin Weaning?

When kittens are orphaned, you may have a bit of difficulty in knowing when to wean them. A telltale sign is when they start biting the nipple of the bottle, at which time they should be around 4 weeks of age. Be careful – one of my rescued kittens bit the nipple right off! If you have been using kitten formula, you can start feeding them kitten kibble mixed in.

Even though wet cat food is often marketed as suitable for kittens, it is advisable to use dry food. In my experience, wet food causes diarrhea and watery stool in kittens. Kibble is best for them, even if it is soaked in some water.

How to Encourage Resistant Kittens

If they are resistant to eating solid food, you can mix it in with a bit of kitten formula. When this method doesn’t work, giving them a bowl of the formula by itself will usually do the trick. When I nursed orphaned kittens, I would let them lick the formula off of my fingers. Immediately, I got them closer to the bowl, at which point they began eating out of the dish. This process may need to be repeated over several days, but don’t fret – a healthy kitten will have a healthy appetite too!

The runt of the litter can also be weaned at the same time, but make sure he is getting enough sustenance. The last time I nursed a litter of kittens, the runt surprisingly was the first to start eating solid food. Nevertheless, he still had a desire to suckle, probably due to the fact that he was born premature, and he lost his mother as a newborn. So, I let him use my fingertips as a substitute for his oral fixation. He has since been adopted, but his family reports that he, to this day, suckles their fingers!

References:
Weaning Kittens: How and When