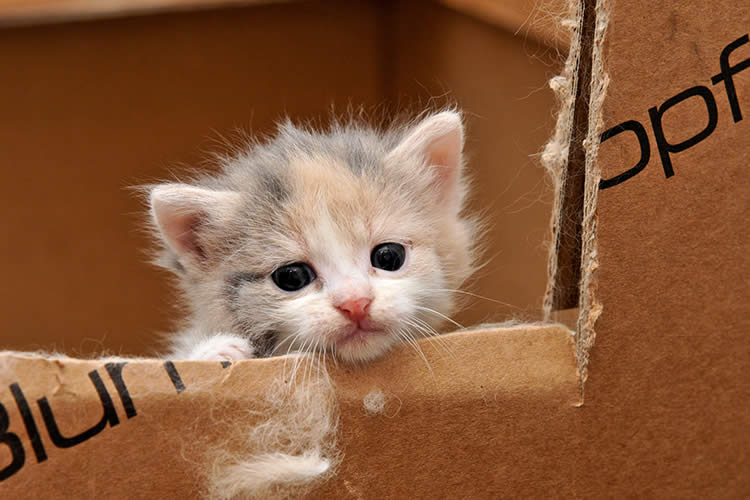 As a volunteer in animal rescue, I’ve had the bittersweet experience of nursing newborn kittens. The animal rescue community even has a term for these fragile darlings- bottle babies. If you see wee little kittens in their earliest stages, their eyes will be sealed shut. About seven to ten days after birth, you will notice that the eyelids will slowly unseal themselves over a 24-hour period.

Why Do Newborn Kittens Have Sealed Eyes?

Babies of any species are extremely susceptible to communicable diseases. Kittens often fall victim to germs as well- especially those that cause upper respiratory and eye infections. Sealing the eyes is nature’s way of protecting these tiny furballs from insidious microorganisms.

Kittens do not have completely developed eyes. Moreover, their eyes will not reach full functionality until they are about two months old. Because their pupils cannot constrict yet, kittens often want to stay in low-light areas even after their eyes open. Kittens will not see well for a few months after birth. They often cannot distinguish actual objects and movements from those in a mirror or on TV. They unknowingly perform hilarious antics as they try to play with or chase shadows and reflections.

What Should I Watch Out For?

If you are very attentive, you can see their eyes start to slowly open over one day. Kitten eyes do not pop open at once. They gradually unseal themselves. You will notice that a small opening the size of a pinhead will appear, and then enlarge over the next several hours. Even though this process is very natural, sometimes we need to be aware of complications.

Do not ever attempt to pry eyes open, even if they still remain shut after ten days. A possible reason is that the eyes are still not ready to open, and may open in a day or two. Another reason is that the eyes may be infected, and mucus is gluing them shut. One of my bottle babies had one eye that opened, but the other eye remained about 75% shut. I could tell that the closed eye was infected and the sticky mucus was causing the eye to remain shut. I used warm paper towel compresses to gently clean and melt away the sticky mucus until I was able to have a veterinarian see her. After cleaning the mucus, she was able to open the infected eye fully, though I had to repeat the process every hour. The vet gave me eye drops, which I dispensed twice a day, much to the kitten’s chagrin.

Do see a vet, and do not attempt any DIY remedies if you are inexperienced – kittens have delicate, underdeveloped eyes which can be easily and irreparably injured.

What Should I Normally Expect?

Kittens have blue or bluish eyes, which develop their “true” color after two months. At seven to ten days, their eyes remain small with large pupils. Around the 14-day mark, their eyes start to enlarge and stand out prominently. The eye color will gradually change over the next few weeks.

The kittens may have opened eyes, but their motor skills and coordination are still poor. They need to be monitored constantly! When you are not monitoring them, keep them in a warm and cushioned crate. Because their eyes cannot handle too much light exposure, they seek out small, dark spaces, and it is quite easy to lose them.

References:
The Nest: What Can Kittens See After Opening Their Eyes?
About.com: Tracking Kittens Development – The First Six Weeks