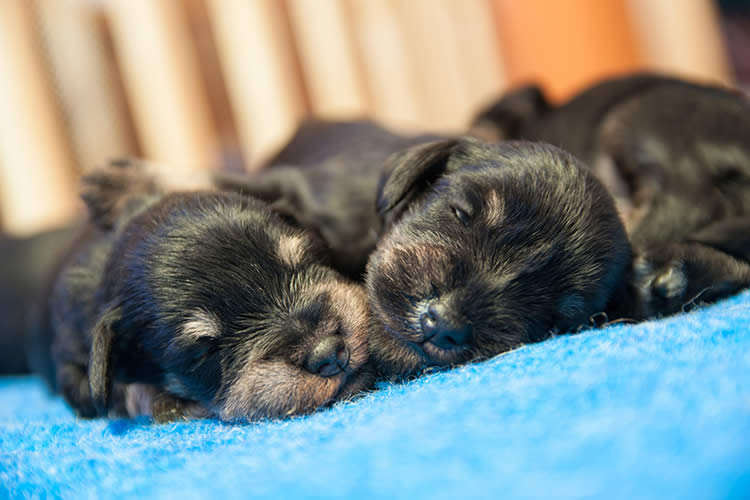 You must have some great self control to not want to touch and hold a newborn puppy and how could you resist all that overabundance of cuteness? It’s not easy but you shouldn’t handle the newborns too much until after their first 2 to 3 weeks of life. There are exceptions, however, that should signal it’s time to intervene and pick up that pup!

The puppies’ mother usually handle their newborns tasks without any human intervention. They’ll clean and feed their young and snuggle with them when it’s time to rest. But if mom (who can sometimes become over aggressive) is ignoring or neglecting her pup or pups, then you’ll have to take action and remove those pups! Also, keep an eye on all the pups and monitor their health. If any of the puppies have trouble breathing or have a problem maintaining a proper body temperature and they’re shivering or overly hot, you’ll have no choice but to pick up the pup and rush to the vet!

Starting slowly is the only way to handle puppies. Handling them in short intervals at first is recommended. A minute or two is enough time for puppy handling for the first or second time.

You do not ever want your puppy to have a bad handling experience so pay close attention to what the puppy is doing at the time of handling. If the puppy is nursing then leave the pup alone! Touching and holding a puppy requires it to be done correctly, so if you follow some guidelines, the pup will be happy and also will benefit from human interaction.

A Few Other Bullet Reminders

As always, if you have more questions concerning newborn puppy handling, always check first with your vet for information concerning your particular breed. Keep those pups comfortable and happy!