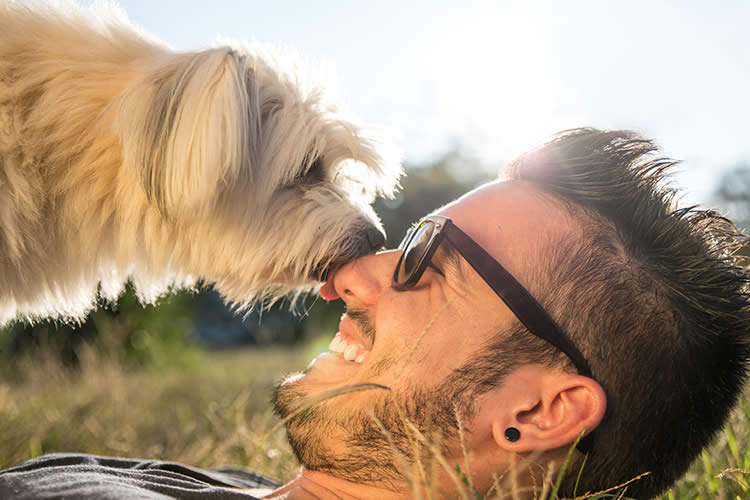 My wife refers to our dog’s licks as “doggie kisses.” As soon as we begin petting him, he begins the licking. Following are a few reasons for all of those “doggie kisses.”

No, dogs don’t lick you to eat you (unsure about wild dogs, though)! Licking is more of a social interaction for dogs which begins the day they were born and their mum licks them to groom them and they continue to lick each other socially. Dogs will also lick their pack members for communication purposes. In certain instances they may be attempting to say to other dogs, “I submit,” I’m hungry,” or “Let’s make whoopee!”

Maybe dogs do like the way we taste! After preparing a meal or even when we spill some food, our dog’s senses can pick up on these yummy odors. So when they’re licking us they’re actually zeroing in on tiny food particles stuck in our skin that they can taste. And yes, it’s true. Dogs can taste and enjoy our seasoning (meaning the salt on our skin).

I’ve often heard of this but how could I believe in this? Imagine canine saliva containing healing properties! I really thought my mum was making this up when she said let the dog lick your minor cut or scrape. Dog saliva actually harbors enzymes that kill off bacteria. So when your pup is licking it’s the bacteria he’s kicking as he cleans away dead tissue and dirt from his wounds. Be cautious however. Dog saliva may also contain Pasteurella, an anaerobic bacteria that can cause serious infections when introduced into a deep opened wound.

Also, some dogs (and cats) just can’t stop themselves from excessive licking which causes wounds to reopen or other problems to arise.

I Just Can’t Stop Myself!

Compulsive licking of the same area repeatedly may indicate a nervous behavior or disorder. If your dog appears nervous or scared while licking, medical help should be sought and it’s time for that vet trip again! Remember, even though licking can be a healthy stress reliever, obsessive licking worsens the problem by reinforcing your dog’s anxiety.

I’ve briefly mentioned dogs communicating with each other by licking but the same licking communication can be used on people as well. We’re not as savvy as canines when interpreting these messages but if your dog is licking you take a close look at everything around you. Your dog may need something- more food, more water, or it’s time to go out!

Affection. This is the most common of reasons as to why dogs lick you. Some pet parents don’t like the licking and some do. It’s a matter of preference just like some dogs lick a lot and others not so much. Licking for affection calms and comforts dogs by releasing endorphins which make them feel happy. But if the licking becomes too much for you and you want your dog to stop, try ignoring the licker by walking into another room whenever the licking begins. Soon your licker will learn licking is the cause for your leaving, and no pup wants their pal to leave them alone!

Licking ultimately is a learned behavior. When dogs get more attention by licking, they tend to associate that rewarding attention with more licking. Dogs will always lick because it’s their nature to do so. Still, they can be trained to taper off. Seeking out the aid of a veterinary behaviorist or certified dog trainer is highly recommended if the ignoring method mentioned above simply doesn’t work.

If the licking doesn’t bother you just consider this: your dog’s licks mean he enjoys your company and this is how he expresses his affection towards you, with respect and love, so enjoy the moment. Alas, it won’t last forever.