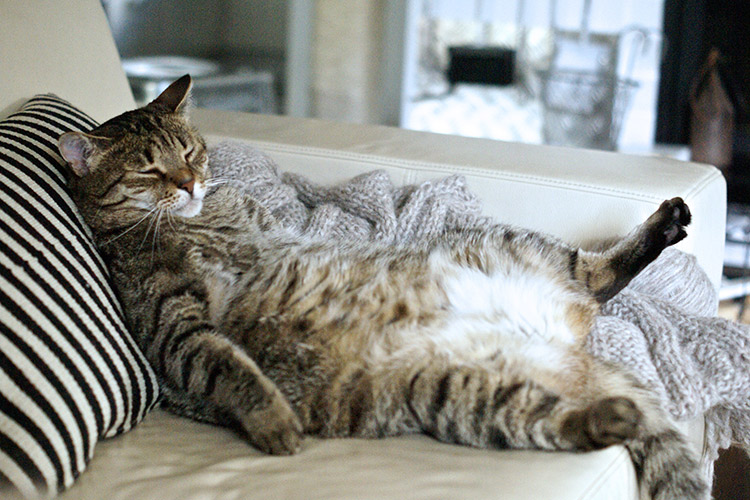 Just like any behavior that our pets exhibit, context is the key to deciphering its meaning. What are the circumstances surrounding the behavior? How has your cat been acting recently? Has this behavior always occurred or did it just start? When your cat lies on her back there are many interpretations so let’s investigate some of them.

Animals are at their most vulnerable when they lie on their backs especially when slumbering. Your cat is a hunter with finely honed instincts. He is very attuned to near and present danger. When he is lying on his back he feels safe and content. You may think he doesn’t care whether or not you exist, but his display of this behavior is simple proof that he indeed does love and esteem you. He trusts you and your household so much that he will let himself recline completely supine in proximity to you.

You might observe that your cat will lie on his back if he is warm. Even though cats crave warmth they, like most mammals, need to expose more surface area of their bodies in heated temperatures. Doing so allows cooler air to pass over the surface of the skin. When your cat is splayed out on his back he might be on a hard surface such as wood or tile. This is one of the indications that he is in this position to cool off.

Cats love to stretch. Most mammals like to stretch! There are physiological reasons why stretching feels so good. Blood flow is improved. Cognitive abilities are awakened especially after a cat sleeps for several hours. Stretching prepares the muscles flushing out toxins that have accumulated. Just as a human stretches in preparation for high-impact exercise a cat will stretch to ready himself for prowling around your house.

It’s easy to tell the difference between a cat who is resting and a cat who is preparing to attack. If your cat is lying on his back when he is playing with the other household pets, it is because he can more easily grip his opponent with all four legs. You can see this behavior in wild felines.

Take, for example, a documentary on lions. When you see the lioness attacking her prey she runs and jumps on its back. But, immediately after, she will pivot her entire body and grab on to her prey from underneath. Not only does this allow her a better grip on her soon-to-be meal, but it also allows her to access the most vulnerable body parts of the animal – namely the carotid artery and the soft underside. Our precious kitties have no need to hunt for prey but they’ve never truly lost this instinct either.

They Are Asking for Love

When your kitty lies down right next to you and purrs he probably wants to be caressed. Even though the purring might sound more like a low growl he voluntarily put himself in arm’s reach of you. Another sign is when he first walks around your legs rubbing himself against you and then immediately falls on his back. This is most certainly a demand for physical affection.

Cats know what they want and how to get it. They know how to manipulate us to do their bidding. Their behavior is not hard to decipher. We all know cats are smart. If they don’t want affection, they won’t come near you – or they will just walk away if they’ve had enough petting.