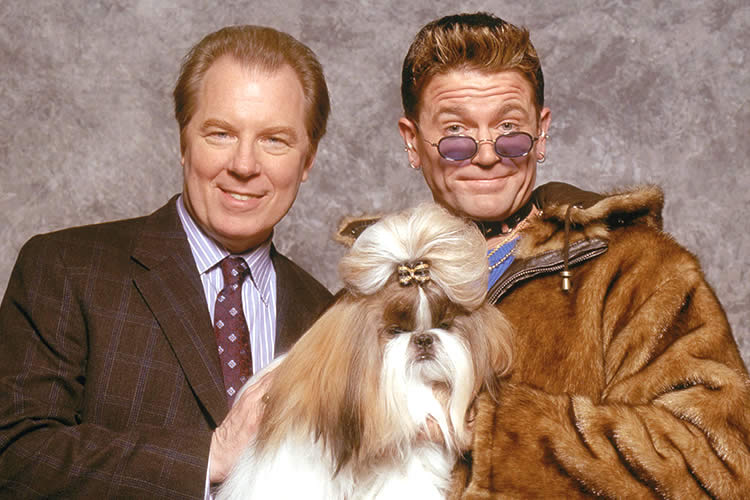 The first true canine star of the silver screen was a collie named Blair way back in 1905, playing the title role in “Rescued by Rover.” In fact, it was this movie that made the name popular for pooches for years to come! Man’s best friends have starred, co-starred – and sometimes entirely stolen the show – in countless movies since.

Unlike many other kinds of animals, dogs are easily trained, making them ideal for demanding film production schedules that depend on getting the shots right. Here are our Top 10 greatest dog movies of all time, in no exact order – don’t ask us to play favorites with these ridiculously cute canines! For fans of the most famous collie ever to grace the big screen, there are plenty of movies (and TV series) to choose from – but it all started with 1943’s Lassie Come Home. After falling on hard times, Lassie’s family is forced to sell their beloved pet. Lassie escapes her new owner and sets out on a long, dangerous journey from Scotland back to her Yorkshire home and family. Also check out the Lassie TV series (1954-1974), Courage of Lassie (1946), the 1994 Lassie remake, and the 2005 Lassie remake. Based on the award-winning book by Fred Gipson, 1957’s Old Yeller is a heartbreaking coming-of-age story. In 1860’s post-Civil War Texas, young Travis Coates is left to manage the family ranch when his father leaves for a cattle drive. Travis befriends Old Yeller – played by Spike, a Labrador retriever/mastiff mix – and comes to love him after the stray proves his loyalty and protects the homestead from trouble. Lady and the Tramp

One of the greatest musical “puppy love” stories ever told, Disney’s 1955 animated tail-wagger stars Lady, a pampered American cocker spaniel, and Tramp, a streetwise stray mutt from the wrong side of the tracks. It features a fantastic musical score, as well as one of the most iconic scenes in American film history, in which Lady and Tramp share a plate of spaghetti, kissing accidentally as they reach the middle of a noodle. Let’s hear it for pasta and puppy love! This animated 1961 Disney classic tells the tale of a litter of Dalmatian puppies that are kidnapped by the villainous Cruella de Vil – who’s plotting to turn them into fur coats! The puppies’ parents, Pongo and Perdita, set out to save their litter from Cruella and her evil plans. See more about the 1961 animated original or the 1996 live-action remake. A young Tom Hanks plays small-town police detective, Scott Turner – but the real star of this show is Hooch, played by the outsized French mastiff, Beasley the Dog. Since Hooch is the only witness to the murder of his owner, Turner takes him in to keep him from being sent to a shelter. The giant mastiff shakes Turner’s house – and his life – upside down, but helps him solve the case and even find love along the way. This Disney dog yarn was a 1993 remake of the 1963 film, The Incredible Journey, which was based on a novel of the same name by Sheila Burnford. Chance (a fun-loving American bulldog), Shadow (a wise old golden retriever), and Sassy (a hilarious Himalayan cat) are left behind by their family during a move. Go on an incredible journey with these three friends as they travel across the Sierras to reunite with their humans in San Francisco. Like Lassie, Benji has been the star of numerous movies, sequels, and TV shows. But this celebrated mixed-breed mutt’s first film, 1974’s Benji, was turned down for distribution by every major studio in Hollywood! Joe Camp (writer, producer, and director) eventually had to form a distribution company of his own just to get the film released in theaters. Benji ended up as the number three box office film of 1974, grossing over $45 million worldwide (that would buy a lot of kibble in 1974 dollars!), and was followed by four more feature sequels. This incredibly moving tale of one Akita’s devotion is based on a true story and directed by the celebrated Lasse Halstrom (Chocolat, My Life as a Dog, The Cider House Rules). As a puppy, Hachi is sent from Japan to the United States, but he escapes his cage and is adopted by a professor. It becomes an everyday ritual for Hachi to meet his master at the railway station and walk him home from work. When the professor doesn’t return one afternoon, Hachi maintains his daily vigil, waiting in the same spot every day for over nine years. A bronze statue of the real-life Hachiko still sits in tribute to this loyal Akita at the Shibuya train station in Japan. Another Disney dog drama, Eight Below was adapted from the 1983 Japanese hit, Antarctica, which was itself based on a true and dramatic story of survival. In the harsh Antarctic wilderness, three members of a scientific expedition are forced to leave their beloved sled dog team behind due to dangerous weather conditions. Left on their own to survive for over six months, the two Alaskan malamutes and six Siberian huskies learn to hunt, share leadership, and look after one another while their trainer tries desperately to mount a rescue mission. Christopher Guest pokes good-natured fun at show dog owners in this 2000 mockumentary that’s easily the funniest and most offbeat entry in our Top 10 (enough tearjerkers, already!). Following the owners of five show dogs headed for the fictional Mayflower Kennel Club Dog Show, the film focuses on the hilarious interactions between the eccentric owners, trainers, and show-runners. The show brings out the worst in the obsessed humans, and proves that the sanest creatures around are the poor pups competing for the blue ribbon.

About the Author
Eric Rosen is a freelance writer living in Venice Beach, California (yes, it’s always 72 degrees). He doesn’t currently own a pet, because his landlord is a mean, mean person who dislikes puppies and kittens and rainbows. So, he gets his furry-pal-quality-time in with friends’ dogs and cats these days, and by fostering shelter dogs when he can sneak them in – but he’s eagerly anticipating the day he can have a puppy pal of his own again.