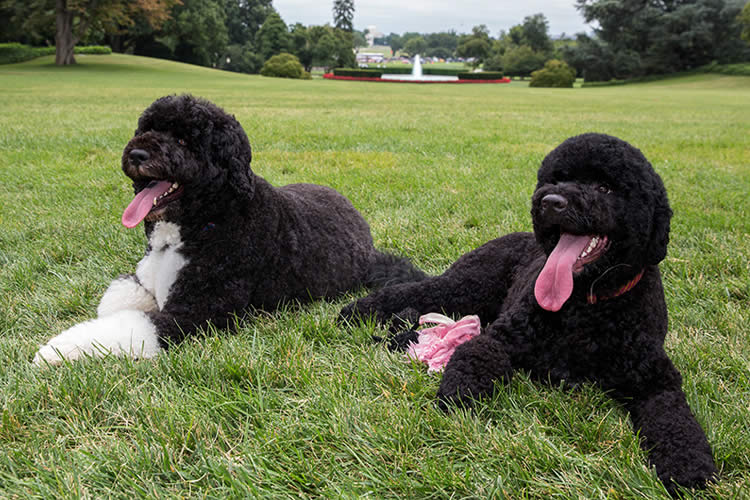 The White House of the past and present has long been the place in Washington where you could see the Presidents and their pets. Many of the U.S. Presidents have been dog and cat lovers but the presidential pets haven’t been restricted to only cats and dogs! Dogs do appear to be the favorite pets to wander throughout the White House and grace the White House lawn but there has been some other unusual residents as well, and some of them just happen to be the pets!

Although our first president, George Washington, was never a White House resident (because the White House hadn’t been completed until John Adams’ presidential administration), George Washington was credited for owning the first presidential pets. Washington was devoted to all animals and he displayed that devotion at his Mount Vernon home. Washington owned many traditional farm animals but his favorite animal by far, was his beloved horse named Nelson. Nelson was a horse with some history. You see, Washington was riding Nelson when Washington accepted General Charles Cornwallis’ surrender at Yorktown! So you can say Nelson was present at the battle that ended the Revolutionary War. Now that’s a horse with some history! President Washington’s wife, Martha, also had a favorite pet – a parrot named Polly but Washington didn’t at all get along wit dat boid!

In the early years of our nation the White House has been the home of some very exotic pets. John Quincy Adams was reported to have kept an alligator left behind by the Marquis de Lafayette. Adams, as the story goes, had the alligator lodged in the unfinished East Room of the White House where he displayed the reptile in a bathtub to some unbelieving, then probably panicky, White House visitors! This reptilian display continued for a few months until it was eventually removed to its new home.

Just as unusual as Adams’ Alligator was Theodore Roosevelt’s “Josiah the Badger.” In 1903, Roosevelt came across the baby badger while on a hunting trip. His son, Archie, became the recipient of this unusual gift. His son carried the badger around with him clasped firm around his waist. Josiah was a nipper though, and when asked about this Archie would reply, “He bites legs sometimes, but he never bites faces.” How comforting!

Roosevelt’s pet collection didn’t stop at the badger, however. He also owned one of the largest pet menageries ever to occupy the White House! In addition to the badger, Roosevelt also owned guinea pigs, ten dogs, two cats, a rat, a snake, a pig, a rabbit, a macaw, a hyena, a pony, a lizard, and a small bear named Jonathan Edwards.

From 1923 to 1929 the White House again became a site for a zoo – during Calvin Coolidge’s presidency! Rob Roy, his beloved collie, was a famous presidential pet in that time but there were more canines at The White House. Coolidge had another collie (a white one), a German Shepherd, a bulldog, and a bird dog. He also had a thrush, some canaries, a goose, and a mockingbird. But I’ve forgotten to mention that Coolidge also had cats, raccoons, a donkey, a bobcat, and even more animals that had been gifts from dignitaries from different countries. These gifts included lion cubs, a wallaby, a hippo, and a black bear!

During the depression in the 1930s, Herbert Hoover’s younger son owned two pet alligators that would frequent the White House grounds. A terrifying sight for visitors, no doubt, but today, hmm, they could be a worthy deterrent to unwanted guests!

Fala was First Dog from 1940-1945. Franklin Delano Roosevelt took this expressive scotty everywhere, even reportedly traveling to important events and on overseas wartime trips! In 1944 this expressive scotty with bushy eyebrows and scruffy whiskers had been left behind on a trip to the Aleutian Islands. A naval ship made a special trip there to get and return him to FDR!

Macaroni was given to Caroline Kennedy when she was 5 years old and was First Pet in 1963. John F. Kennedy and his family owned many pets but Macaroni was their favorite. You could often see Caroline riding Macaroni all around the White House lawn.

From 1989-1993 George H.W. Bush’s presidential pets included an English springer spaniel, Millie, and Ranger, one of Millie’s puppies. Ranger was often considered to be Bush’s favorite dog but it was Mommy Millie who was destined to become an author. She was the only White House pet to have written a book, “Millie’s Book: As Dictated to Barbara Bush.”

Bill Clinton’s presidential pets included the famous Socks, the black and white American Shorthair cat and later on Buddy, a chocolate Labrador retriever. Socks was first (1993-2001) on the scene and loved posing for the photographers cameras (the Clintons, however were not really happy with the manner in which Socks was lured out on these photo ops). Nevertheless, Socks was a media favorite who went on to even having a website! He always returned all of his fan mail with his signature paw print. It all came to an end in 1997 when the Clintons adopted Buddy, the lovable retriever who occupied the White House from 1997-2002. Socks never warmed up to Buddy and was therefore voted out of the White House. Poor Socks!

These two Scottish Terriers were President George W. Bush’s First Dogs from 2001-2009. Barney quickly became part of the family according to President Bush. Barney loved playing with his soccer ball. Movie legends were born when the president gave Miss Beasley to his wife Laura on her birthday. It was then that the “BarneyCam” was born. For years to come the public enjoyed both pets in their many White House movies and their countless antics and Christmas celebrations. The Bush’s also owned an English springer spaniel named Spot, cats named India and Ofelia, and a longhorn cow that actually resided at the ranch.

Our latest White House occupiers (subject to change in the very near future) are two hypoallergenic breeds of Portuguese Water Dogs whose names are Bo and Sunny. These two dogs are owned by President Obama and his family. Sunny is known for causing havoc at Christmas events by knocking over a guest or two. Merry Christmas!

And it comes to no one’s surprise that many of these pets have gotten more press than their presidential owners. But really, when you think about it, both pets and children always steal the scene when in the presence of an adult…even if that adult happens to be a president!