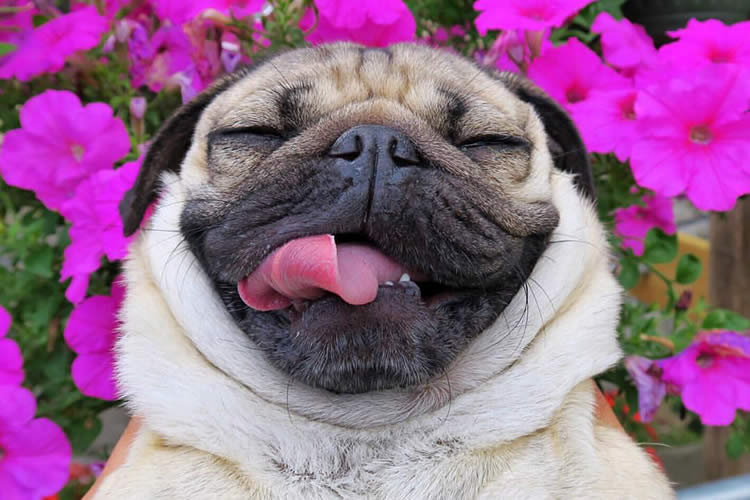 The dogs of Facebook! With millions of likes, the humans have made their voices heard. Check out the cutest pups on the FB! We’re talking hundreds of thousands of Facebook “likes” – if not millions! Sure Mark Zuckerbug’s Puli dog Beast is internet famous and made the list but check out these other famous faces.

With an overbite reminiscent of Monty Burns, Tuna is an “adorable 3 year-old Chiweenie who was born with an aggressive overbite and a lower jawline-dysfunction. He also has 5 moles surrounding his mouth, a crumbled chin and a neck that looks like he has been soaking in a bathtub for days!” So says his Facebook, so says his cuteness!

Fifty is a differently-abled pitbull, an ambassador, and, of course, a chick magnet! This fella lived through adversity and now stands as an example for pitbulls fighting stereotypes and showing pits can be amazing pets.

Mishka is a 9-year-old Siberian Husky who enjoys talking, singing, playing, and chasing squirrels. Just listen to this cutie “talk”!

Crusoe is a miniature black and tan dachshund. But don’t take “miniature” too much to heart. He was named after Robinson Crusoe for his deep sense of adventure and natural ability to instill fascination in the public eye.

Manny was named after the  boxer Manny Pacquaio. He is a pure bred French Bulldog with an exuberant personality. Manny has been asked by talent agencies across the nation for print ads, movies, and commercials.

The most famous of Facebook pets, really, and that’s not just nepotism talking! Beast is a Puli, which is a type of Hungarian Sheepdog. He lives in Palo Alto with Mark Zuckerberg and Priscilla Chan.

Doug The Pug is a 3-year old pug from Nashville, TN who has captivated audiences with his witty captions and funny videos. With over 5 million fans worldwide, Doug is one of the most famous dogs in the world.

Boo claims the title of world’s cutest pup and we think he’s pretty dang close. Check out what 18 million fans can’t get enough of!

About Sully
Wrooooof! I was rescued from Noah’s Bark Rescue. I’m originally from South Central L.A. where I was found in a box in a parking lot with my littermates. Straight outta Compton! Nowadays, I spend my time napping and working on Sullyburger.com.