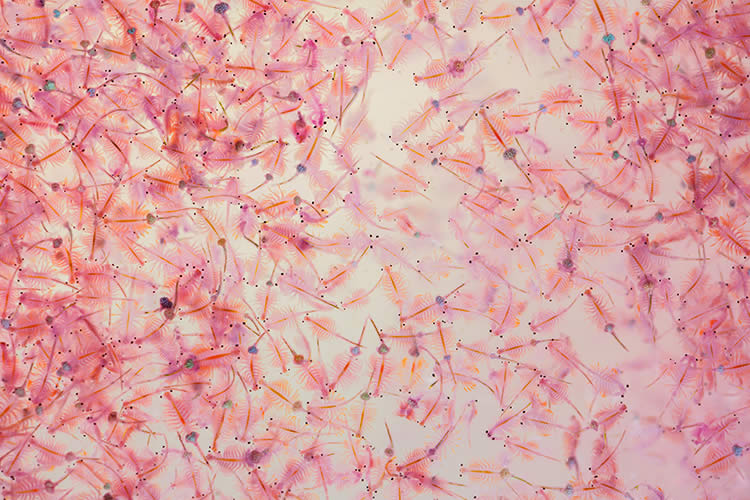 The “Sea Monkey” was actually a copyrighted brand name for a product invented by Harold von Braunhut in 1957. Surprisingly, these seemingly simple-looking creatures took years to develop as they are not a species found in nature. His biggest obstacle was finding a variety of brine shrimp that would survive the suspended state of cryptobiosis but also live long enough after hatching to make them worthwhile pets. Thus, a hybrid species, the Sea Monkey, was born.

Sea Monkeys are marketed cleverly – with cartoon images of humanoid mer-people gracing the packages. Unfortunately, the tiny eggs don’t hatch to produce little beings with arms, legs, and monkey tails – and they are so small that the human eye would entirely miss them in a lake. In their rectangular prismatic biome, they are clearly visible to us – as minute little shrimp. Still, knowing that you are in charge of their miniature world as they grow, mate, and produce is a joy – even if the advertising is an exaggeration of their appearance.

A purchase comes with three packets – a conditioner packet, an egg packet, and a food packet. The conditioner packet is not a marketing gimmick – it is necessary to ensure that the salinity of the water is optimal for the Sea Monkeys to hatch and thrive. The second packet contains the eggs and an added dye to make the crustaceans visible after hatching. The third packet contains food. Also included is a tiny pump to aerate the water to force a bit of oxygen into it.

How Do They Hatch?

Brine shrimp eggs are encapsulated and can dry out or harden without the presence of moisture. However, the eggs, called cysts, have the remarkable ability to stay viable for years. Once they are placed in water again, the eggs will be activated. Sea Monkeys are specialized to maximize the number of healthy eggs that hatch and to maximize their life expectancy. The average life expectancy of a Sea Monkey is approximately three months.

Even though the eggs may instantly hatch, you probably won’t detect your little pets until after a day or two. After that 24-hour period, hold your small aquarium up to a light and you’ll see pinhead-sized white dots wiggling around purposefully. Perhaps in 10 to 14 days, your Monkeys will be full grown and up to a half-inch in size.

Some things that will prevent your eggs from hatching and the Monkeys from thriving are: not aerating the water enough, feeding them too much or too little, and not keeping the water at the optimal level consistently. If the water gets a little murky, stop feeding the Monkeys until it clears up. They can and will feed off the algae that collects on the sides and bottom of the tank. Avoid scraping the algae off – this will disrupt their small ecosystem. Furthermore, algae has oxygen-producing capabilities which is important to a long and healthy Monkey life.

Additionally, your packet of Sea Monkey eggs is the gift that keeps on giving. When your Sea Monkeys are adults, they will mate! You’ll notice that two Sea Monkeys will be attached to each other for a few days which means they are in the process of making babies. If you take care of your tank, water, and Monkeys, you’ll witness several generations of these cute crustaceans hatching and reproducing.