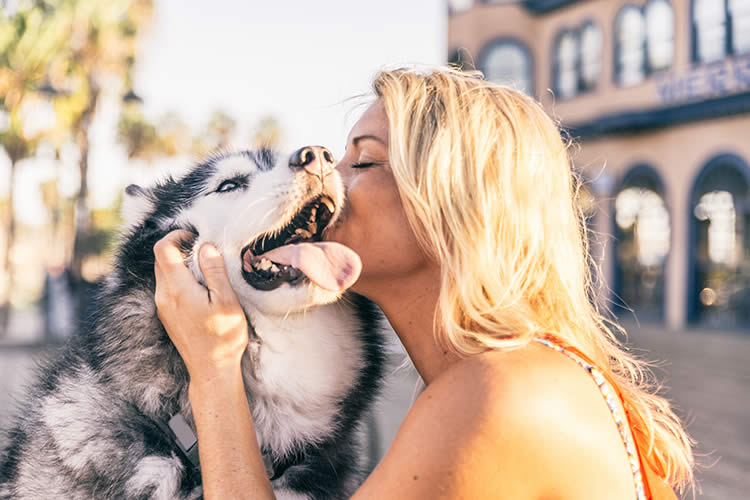 Even though I’m an avowed animal lover, I can’t in good conscience back up the claims that having a household pet will indeed make you healthier. Here’s what we do know – having a pet correlates with people who are healthier mentally and physically but there is no proof of causation. Whatever the science shows, animals are a part of our daily lives. We profoundly feel love for a pet and just as profoundly feel the loss of a pet who we’ve nurtured.

People who have pets are thought to be happier, more patient, and overall less prone to depression or anxiety. They make us feel less lonely. Some studies show that a chemical called oxytocin which elevates mood is produced in both a dog and his human when they stare at each other. Others believe that the act of attending to the needs of animals also helps ward off sadness or depression. People who have pets don’t focus on themselves as much as they would without a pet. Pets also elicit real unconditional love from humans – they cannot give anything tangible back to us yet we do everything for them.

Pets seem to coincide with a decrease in blood pressure, bad cholesterol, and triglycerides. People who have pets often increase their activity levels in carrying out the tasks required to take care of the animals. They walk their dogs, clean litter boxes and cages, and play with their animals. The increased exercise along with the calming effect of animals is believed to lower blood pressure. Kids who grow up on a farm or in a house with a pet don’t appear to have as many allergies as their less fortunate counterparts. Growing up with animals seems to make the body less hypersensitive to would-be allergens later in life.

Even though most of us just can’t imagine life without pets, we can’t logically conclude that they undoubtedly make us healthier. For example, we know that obese people are more likely to have obese pets. And what about people who can’t stand animals? Even though I wouldn’t want to be around anyone who doesn’t like animals, they unfortunately exist. People who have an aversion to animals (as silly as that sounds) would not be happier or healthier with a pet in the house. Likewise, people with severe allergies to animals would not be physically healthier having a pet.

Scientific studies cannot conclude that animals make people healthier because most of these suppositions are based on empirical and anecdotal evidence. Double-blind studies or using a placebo is next to impossible here – there’s no way you can have a “placebo”” pet. Additionally, the empirical data has too many variables to definitively prove that animals indeed make a person healthier. Many households with a pet have more disposable income meaning they have access to better food, better health care, and live in more affluent areas.

The studies often focus on dogs and less frequently on other animals. The ways animals affect us largely depends on the species of the animal. The age of the person in question is also a huge factor – older people may be too frail and their immune systems are more likely to be compromised and therefore a pet would be inappropriate for them.

So, What’s the Conclusion?

The conclusion is if you love animals, then adopt one! Chances are you feel that something is missing in your life and an animal can fulfill that need for companionship. For those of us who are already happy and healthy, animals will only bring more joy and augment our lives. But, there is no such thing as a magic pill and there is no such thing as an animal who cures all ills. If you are angry or unhappy with your life, a pet may not be the best thing for you. What science cannot explain is that we love our animals even if they don’t they bring us happiness, health, or wealth. We love our pets without reservation and thus many of our furry/scaly/feathery friends live better than half of the people on this planet. In the end, we don’t have pets because of what they can do for us but because of what we can do for them.

References:
The Atlantic: Cats Are Not Medicine
Harvard Health: The health benefits and risks of pet ownership
Woman’s Day: 10 Health Benefits of Owning a Pet
Balance Me Beautiful: The Ultimate Guide to How Pets Improve Our Health