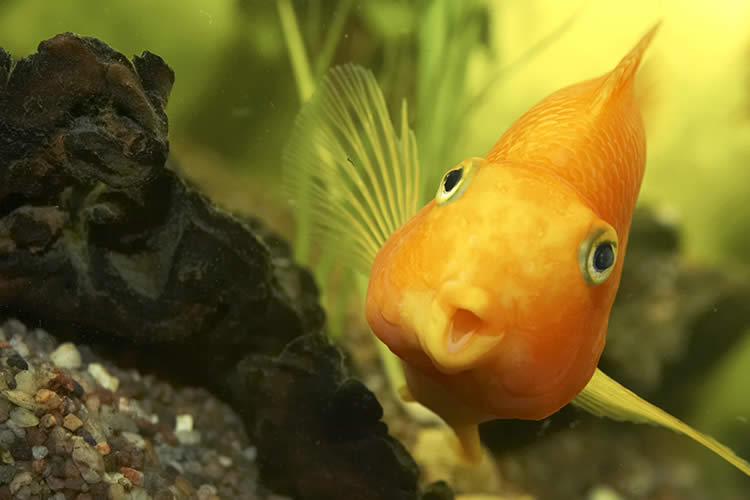 When I’ve gazed into an aquarium the one thing I’ve never seen is a goldfish cuddling beneath a warm blanket while resting its head on a pillow in order to get some well deserved sleep. I wonder why? Well, for one thing, sleeping for  goldfish is not the same for them as it is for us. And another thing is…this ain’t no Warner Brothers cartoon folks!

How Can a Goldfish Sleep?
Good question. Since goldfish have no eyelids, you may wonder how they can sleep when they can’t even close their eyes? Goldfish rest in one spot and hover now and then sporadically in order to remain stable. They rest at times during the day and mostly at night. So their “sleeping” is more like a rest than a sleep and they’re always aware of their surroundings and what’s going on around them. Just try turning on the aquarium light in the dead of night and you’ll see how your startled goldfish erratically searches for places to hide in the tank!

And Speaking of Lighting
One thing you should consider is to have your aquarium lights set on a timer so they switch on for a certain period of time during the day and off at night. The average time for an aquarium light to be on is 12 hours a day or less. If your lights aren’t timed, the best action to take would be turning them on when you awake and shut them off when you go to sleep. Your fish do need sleep and you’ll notice how they’ll slow down when the lights are turned off. If you keep the lights on all of the time, your goldfish will still sleep but it won’t be as good sleep as if the lights were turned off. Even bright room lighting can disturb your goldfish’s sleep, so it’s best to turn off room lighting at night if possible, so your fish is in the dark. Your fish will always prefer the dark to the light!

Don’t Confuse Sleeping With Dying!
Another sleep indication is a color change in your goldfish. When a goldfish is asleep its color will fade. So if you’re observing your fish and their color is partially faded, there’s a good chance that they’re not dead but asleep! Goldfish may also tilt their bodies downward with their heads pointing down about an inch or so at the bottom of the aquarium.

Swim Bladder Disorder
A behavior that isn’t normal and doesn’t indicate sleep is when you notice your goldfish swimming upside down or heavily regarding one side. This could very well be a disorder called “swim bladder disease.” Also known as “flip-over” this ailment is not contagious. Swim bladder disease affects aquarium fish and sometimes can be remedied within a few hours depending upon the cause. If the cause is a blockage in the fish, you can try and clear it with a boiled, de-shelled green pea which will act as a laxative. If the cause is a bacterial infection, worms, or stress, other avenues of treatment may be necessary. The entire tank will require cleaning if the cause is a bacterial infection because it poses a danger to your entire fish population.