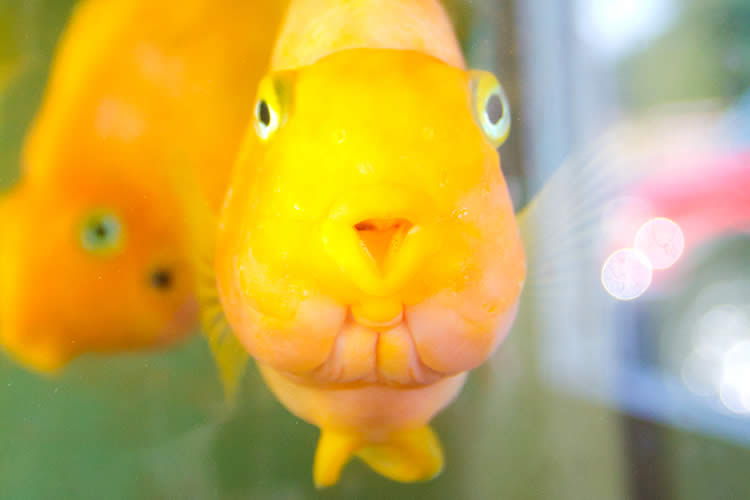 When you think about it, you can name a number of fish that have teeth. The piranha has teeth, a lot of them, and they’re sharp and deadly teeth! The shark has teeth – big teeth! The barracuda has sharp-edged fangs much like that of the piranha. But what about the lil’ ole common goldfish. Do goldfish have teeth? The answer is quite surprising because, yes, goldfish do have teeth but they aren’t scary shark, piranha, or barracuda choppers like ones associated with creatures from the deep, dark depths of the ocean!

Goldfish teeth are called pharyngeal (pronounced fuh-rin-jee-uhl) teeth. These teeth remain unseen because they’re not located along the gum line but are situated further back inside the mouth near the pharynx. The pharyngeal teeth aren’t used for tearing and ripping flesh but are used for grinding food. Just turn off your tank filter and listen while your goldfish is feeding. Sometimes you can hear the crunching and grinding of the food as the goldfish puts its teeth (which in actuality are simple hard projections) into action. So the pharyngeal teeth are really teeth not for tearing and ripping but are teeth for grinding food.

Cichlids (Not as in Michael Chiklis)

A cichlid is a species of fish that is as small as 2.5 centimeters and as large as a meter. Some of the fish in the cichlid family are the tilapia, the angelfish, and the Oscar. Goldfish are in the family of minnow along with the carp. The number of cichlid species existing is unknown but a healthy guess would be around 1,300 to some 3,000 species. And why am I mentioning cichlids? Because this group of fish, like goldfish, have pharyngeal teeth!

The Evolution of Pharyngeal Teeth

In the pharynx of jawless fish, about a half a billion years ago, these teeth first evolved near the pharynx of some fish and thus predate jaws. Pharyngeal teeth are teeth in the pharyngeal arch of the throat in a number of fish species lacking teeth. There are some cichlids with a total of 3,000 teeth with every single tooth being replaced about every 100 days…believe it or not!

Goldfish have the same type of tooth replacement that is mentioned above and are in a constant losing and growing phase when it comes to teeth. Teeth that are lost are soon replaced and to the fish this tooth replacement is not at all painful. The fish simply spits out and ejects the tooth when it becomes detached. Discarded teeth can be found dotting the substrate on the bottom of your tank. If you don’t have substrate in your tank, the teeth are even easier to locate as they are very flat and look a bit like human molars. If only we could spit out our teeth and replace them in an instant – a dentist would be a very lonely person.