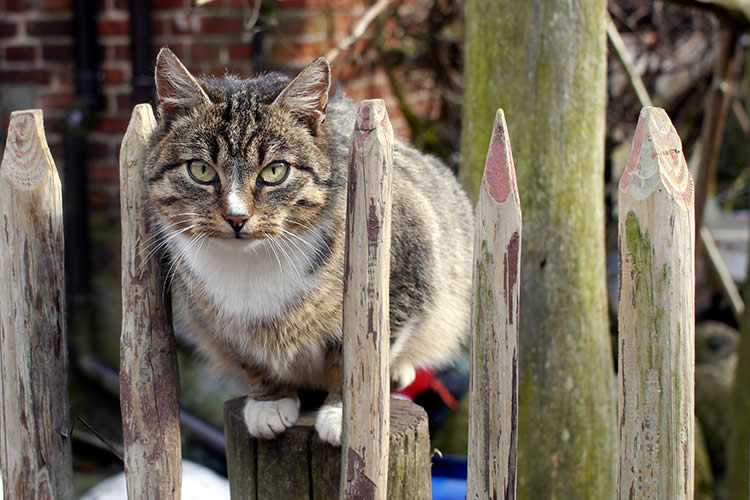 I’ve seen cats in many tough predicaments, some of which I pondered “how is that darn cat going escape from the mess he’s gotten himself into?” Of course, I’m referring to my cat, Mitz, a grey striped Persian, mixed with an alley cat who had white mitten paws and feet. He was my buddy for 20-some-odd years! And for all his cat fights and dog fights I had honestly begun to wonder if the old adage had been true: “A cat has nine lives. For three he plays, for three he strays, and for the last three he stays.”

Does a Cat Have Nine Lives?

According to scientists, no, cats do not have nine lives. Although, science aside, it sure seems as if they do! It’s amazing cats can stretch their one life into what seems like nine! This incredible illusion is due to cats’ lightning reflexes along with their “righting reflex” and their flexible backbones that allow them to get in and out of tight places.

Once you hear of a cat surviving a fall from a great distance, the nine lives proverb comes into play. Their righting reflex actually allows them to twist and turn mid-fall so they can land on their feet. When their extremely good balance is coupled with their flexible backbones, their survivability capabilities increase.

Of course, physics comes into play after a certain height so please do not attempt to drop your cat off, say, the Empire State Building or out of a plane in flight! The righting reflex works in conjunction with cats’ other abilities such as jumping and landing. Cats are high jumpers and when they jump they’ll usually land upright upon their feet…usually. Of course, there are exceptions, like that one cat you have who is totally clumsy.

In Greece, the number nine has always harbored magical connotations. In Ancient Greece, nine was a mystical number that was referred to as “The Trinity of Trinities.”

In Egypt, cats also have been worshiped and revered. The nine gods of the Ennead were composed of the sun god Atum-RA who had given life to the gods of the air, moisture, earth, and sky. Henceforth sprung up Osiris, Isis, Seth, and Nephthys. When Atum-RA visited the underworld he took on the appearance of a cat who embodied nine lives in a single creator.

In Europe, the legend of the cat transmuted from divine to magical during the Middle Ages. Unfortunately for cats, Europe was a tough place to exist with some very bizarre rituals that had cats even being tossed from high towers. In the year 962, Baldwin III, Count of Ypres, allegedly threw cats from a tower nine times and was so surprised by their survival that he left them alone! The cats’ history is still remembered to this very day in this Belgian town with an annual cat festival where artificial cats are thrown from their Cloth Hall Tower! Live cats had been used up until the year 1817 but only toy cats are used now.

In 1894, cats’ remarkable ability was captured by a camera that took 60 images a second. French photographer and physiologist Etienne-Jules Marey’s photographic research (for human and animal movement) caught a cats fall which demonstrated how a cat rights itself and lands on its feet by twisting and maneuvering its head, back, legs, and tail to lessen the impact.

But cats do not always land right side up which is one reason they sometimes return home with bumps and bruises and limps. About 90% of cats falling from varied heights survive with broken bones and bruised paws but the distance of the fall for survival is crucial. Too high a fall and the most agile cat will meet with an unkindly end! Too little a fall and the cat doesn’t have the time to correct itself to land upon its feet. Still, the nine life myth endures and I suppose the myth will endure for a long time to come!