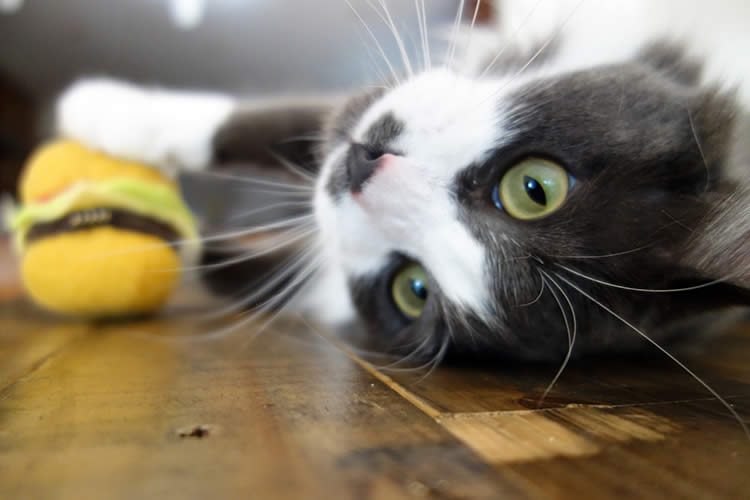 Why do cats have a euphoric fascination with catnip? One whiff of this dried out plant sewn into a cat toy and cats usually go crazy. My cat was content with tearing a catnip mouse to shreds while sneezing from the catnip’s effects, then rubbing his face into it with more sneezing and rolling on the floor! Every cat’s catnip antics differ but they’re all certainly amusing…as long as you never try taking away the catnip when your cats at play! Amazingly, it’s reported that nearly 50 percent of cats aren’t affected by catnip at all, which is why catnip may be a sensitivity that is quite possibly inherited.

What Exactly Is Catnip?

Catnip’s scientific name is Nepeta Cataria and it’s a member of the mint family. Also referred to as “catmint” or “catswort,” this fragrant plant is native to Europe, Asia, and Africa. Catnip can also be found in North America and around the entire world, where there are more than 250 catnip species. The catnip plant can grow two to three feet tall and its leaves resemble that of a heart. Their tips will sprout either white, purple, or pink flowers.

The ingredient that drives cats crazy is not the outside of the plant but what is inside. The stem and leaves contain an oil called nepetalactone. When a cat sniffs nepetalactone, special receptors are stimulated to sense chemicals called pheromones. This in turn makes a cat very euphoric, an effect that has been compared to that of a hallucinogenic drug! If you have catnip in the house it’s best to keep it refrigerated, frozen, or stored in an airtight container because catnip loses potency over time (and no cat wants that, man!) The Smell of Catnip

The catnip experience for a cat is mostly an olfactory one. A single whiff of catnip and cats will scratch at it, rub their faces into it, chew it, and lick it. Even stronger reactions to catnip include friskiness, growling, purring, drooling, and a ton of crazy antics and actions lasting usually for several minutes. When eaten, catnip can cause a cat to become mellow. Like, meow, man.

After the effects wear off, the cat usually will just leave it and walk away, only to come back later with the same wacky behavior as before!

But not all cats are subject to catnip’s effects. Young kittens and older cats fall into this category. Heredity is believed to take a part in whether a cat will or will not react to catnip, meaning a cat’s reaction to catnip is inherited from its parents. The trait usually emerges when the cat is between three and six months old. Oddly enough, cats from Australia aren’t affected by catnip but big cats, such as lions, tigers, and leopards have reactions somewhat like our little ‘ole house cats!

Other Uses of Nepetalactone

Want to keep flies, mosquitos, termites, and cockroaches away? Researchers have discovered that nepetalactone may be as much as 10x better than DEET (an insect repellent). Too bad nepetalactone loses its effectiveness when applied to the skin!

When used as a tea, as it has been for years, catnip can produce a soothing or numbing effect like a mild sedative. Throughout history the plant has also been used to treat nausea, toothaches, and headaches.

And although it can be smoked (some believe it can deliver a mild high when smoked), I wouldn’t suggest that method. Catnip is very harsh which causes a lot of coughing and it may even cause a stomach ache and nausea…and that’s all I’m gonna say about that!