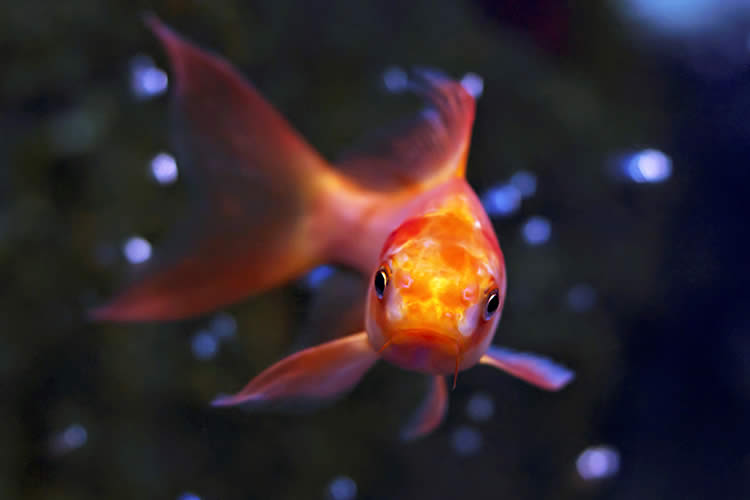 Have you ever noticed how your sudden movement in the vicinity of your aquarium sends your goldfish into a panic? The reason is the goldfishes’ vision can see distances only up to around 15 feet. Beyond that and any simple movement may startle your fish, unlike sudden close moves and gestures which preserve the relative calm of your goldfish.

The eyesight of goldfish is a highly developed sense, however, and in some instances their vision is superior to that of a human! But how is the vision of a goldfish when we’re talking about night vision?

The Science of a Fishes’ Sight

We all know how vision is an important sensory system for any animal or human and the eyes of a fish are similar to the eyes of any bird or mammal, save one key feature – the eye lenses of fish are more spherical. In humans, the magical color combination is RGB. We humans can see in three colors – red, green, and blue – and we can also discern between light and dark. Goldfish can see the RGBs of the world also, but with one added attraction – they can see ultraviolet light which, in turn, makes them sensitive to polarized light.

There are four visual pigments mediating fish vision which absorb various light wavelengths. In order to see UV lighted objects some vertebrates absorb UV light. This is an evolutionary trait which is present in many fish and is most likely implemented for communication, mate selection, and foraging. Even though many fish can see beyond the UV spectrum and even into the violet, UV light may be used only during a portion of the life of the fish. Older fish move into deeper waters where there is little or no UV light at all!

Dark water fish such as the hagfish and its ancestors have been pushed into the very deep waters of the ocean. In those dark ocean waters they’ve become less prone to be attacked by sighted predators. They developed primitive eyespots and have no need for well developed eyes (like the lamprey, for instance). This convex eyespot is capable of gathering more light than a concave eyespot so these dark water fish have eyes that are suited best for their environment.

Recent studies suggest goldfish (and some other fish) are sensitive to polarized light. In the morning or at dusk, polarized light is the most abundant. Polarized light may reflect off fish scales and aid fish to detect other fish against a diffuse background. This information may be useful for fish schooling by displaying proximities and orientations to neighboring relative fish. Also polarized light aids in allowing fish to detect predators or prey through water surfaces by avoiding interfering reflections. Polarization even helps fish in recognizing you! This is the reason your fish will gather near and recognize you on a sunny day when it’s time to feed.

More on the Lateral Line System

These are the sense organs in vertebrates that detect movement and vibration in water. Modified epithelial cells, known as hair cells, respond to displacement resulting from motion. These signals are converted into electrical impulses via the excitatory synapses (an area in the nervous system where signals pass from one nerve cell to another). You can faintly see the LLS as faint lines running lengthwise down each side of a fish’s body from the gill covers to the base of the tail.