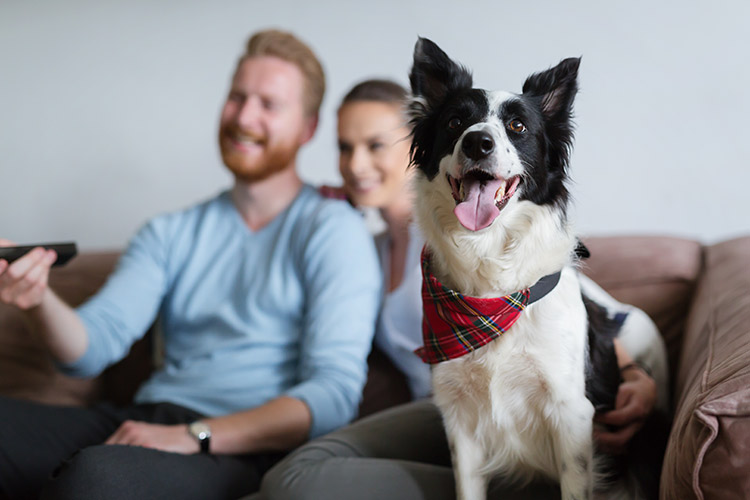 Nowadays, I’d rather spoon with my dog while binge-watching the latest series on Netflix. I like to think Thisbe just enjoys being close to me, but she seems to perk up during certain scenes. Then there’s my cat, Peter, who thinks the moving pictures are an interactive experience made just for him. There’s even a channel called DogTV made especially for those pooches who are alone for long periods of time. But…what exactly do dogs see when they “watch” TV? Do all these attempts to Facetime and Skype with our furry kids amount to anything? Let’s see what the experts say!

If you’ve had dogs for at least the last 20 years, you might have noticed a difference in the way they behave in front of the television. Much of this could be attributed to the improvement in picture quality, and more importantly – flicker rate. Dogs’ eyes can see faster flicker rates than humans can, and because the flicker rates have increased in today’s TVs, dogs can better see “continuous” motion on TV. To get an idea of how we see low flicker rate, think of the movies of the 1920. When we view these films, they seem to blink and the movements are choppy (not smooth). This is probably how dogs viewed moving images on TV until just recently.

DogTV, in this vein, is its selling point. It is not just a cute name. You pay for the extra flicker rate which will hopefully engage your dog’s attention while you’re at work. Along with catering to a dog’s special vision, DogTV purportedly gives your dog the best auditory experience customized for canine ears.

There is a myth that dogs see only black and white. This isn’t true – they can see colors in the yellow and blue ranges called dichromatic vision. So, they can see many of the images on TV, although not as clearly as humans can. The movements are what will catch their attention. Galloping and running seem to interest dogs a lot. If you’ve got a gigantic TV set that takes up almost an entire wall, the life-size images will certainly engage your dogs much more than the smaller cathode-ray sets.

Without sound, the TV will get boring very fast. My dog still, in her senior years, gets excited when she hears dogs, cats, or babies on TV. If an actor on TV knocks on a door, Thisbe will go insane. She’ll even run to the front door to see who the intruder is. So, it’s clear that sound plays an important part of your dog’s TV-watching experience.

Dogs seem to enjoy TV as long as they are with their beloved humans. No robotic machine will ever take your place. Dogs are pack animals. They thrive on physical contact and smell. When an object has no smell it fails to interest most dogs for an extended period of time. You might notice that your dog’s interest in TV will wane as he matures. At some point, he will learn that the TV is just some object that has no meaningful presence in his life.

References:
National Geographic: Why Do Dogs Watch—and React to—TV?
PetMD: Can Dog’s See TV?
Psychology Today: Do Dogs Understand What They Are Seeing on Television?