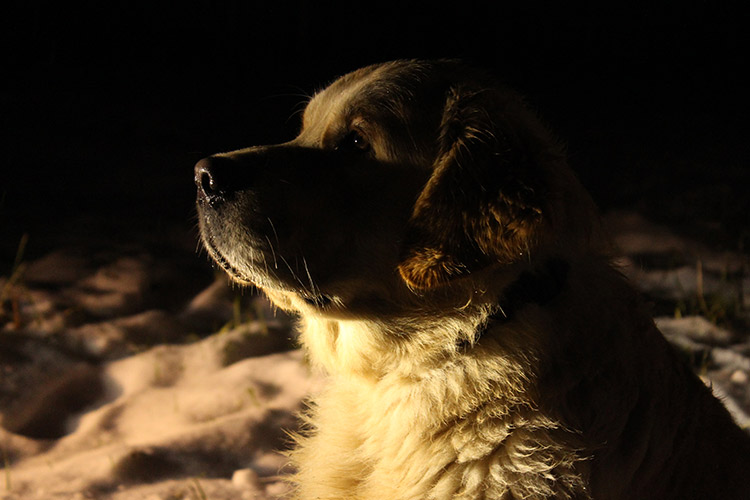 Cats are nocturnal and are known for their excellent night vision. Dogs were likewise blessed although not to the same degree. One fact holds true – dogs have much better night vision than we do!

Evolution of a Hunter

Darwin thought that dogs were descended from a mix-up of a many wild dogs. Without the benefit of modern technology, we can’t really fault a guy from the Victorian era for trying. A couple of decades ago, scientists discovered hints that the lovable dog may be the descendant of an Eurasian wolf. Even though the divergence between cuddle buddy and predator probably started close to 130,000 years ago, dogs still have maintained some of the physical adaptations of their brethren.

One of these adaptations was superb night vision passed down from their ancestors a very long ago. Descended from night hunters, dogs have similar vision to mammals who prey upon other animals in the darkest hours. Along with an exceptional sense of smell and keen hearing, dogs have the physical makings of a good predator, if not for their sheltered existence in our homes.

The Biology Behind Night Vision

To make superior night vision possible, dogs have enhanced traits – like other mammals that also hunt at night. The dilation of their pupils is very wide allowing any available light to enter. They see about five times better than a human partially due to the many rods in their retinas. By contrast, humans don’t have as many rods, but we have more cones which allow us to see a rich palette of colors. However, our sensitive cones don’t do much to improve our night vision.

One of the distinct features that animals with excellent night vision have is the tapetum lucidum located at the back of the eyeball. At night, when you see eyes glowing out at you from the bushes, it’s not because the animal is possessed by a demon. It’s because of this tapetum lucidum which causes a reflection. Whatever light isn’t absorbed by the rods bounces back into the retina preventing the loss of the light waves, thus allowing the animal to see better in the darkness. Dogs are endowed with this biological feature. When you use flash to take a picture of your dog, you might see his eyes illuminated in the photo with an alien glow. Now you know why this phenomenon known as eyeshine occurs!

From Hunter to Lapdog

Ever since the lives of dogs intertwined with the lives of humans those tens of thousands of years ago, they haven’t needed to hunt for their primary source of food. In exchange for shelter, protection, and a hunting companion, dogs were given a place at our hearth and at our tables. Now, they only need to give us those puppy dog eyes and we give them the best food and more than half of our bed space. Their good night vision is only a random useless fact that has no bearing on the importance they have in our lives.

References:
Business Insider: How Dogs See the World Compared to Humans
Science Daily: How Well Do Dogs See at Night?
Animal Planet: Can Dogs See in the Dark?
PBS.org: Evolution of the Dog