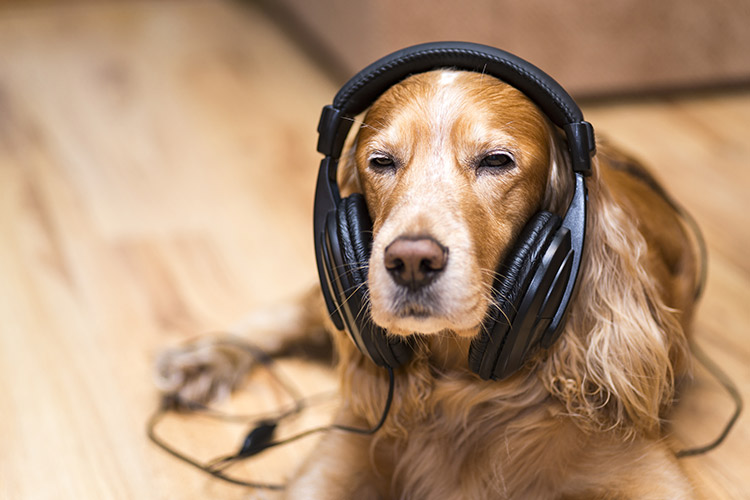 It seems that dogs like music just as much as humans do with a caveat. Dogs like certain types of music – but do not have a wide range of appreciation for different genres. While people like all kinds of music from the heaviest thrash metal to the most generic elevator Muzak dogs pretty much prefer the Muzak side of the spectrum.

The Biology of Dogs’ Ears

Dogs have sensitive hearing. We know this because they hide during thunderstorms. They hate fireworks. They hear the slightest noises such as tiny creatures scurrying around or the soft footfalls of a stranger approaching our front door.

They seem to be more sensitive to high pitch sounds such as cymbals or the right-hand side of a piano. They like lower pitch, more fluid tones such as the voices of people talking. Your dog may have been bred to have especially sensitive hearing which explains why some are more fearful or agitated than others when they hear loud sounds.

Some dogs are known to howl or make undulating long sounds. Some researchers think that they are making their own songs. They like to hear themselves “singing” and they probably think you like it too! Dogs will often howl along with us when we sing or play instruments – this is their way of communicating their joy and pleasure in the music. There are plenty of viral videos that prove how happy dogs are when they hear good music.

Their wolf ancestors and cousins are known to howl, a ritual which some domesticated dogs have carried on. Howling may be a way to communicate to other dogs and wolves that a territory has been claimed. Interestingly, howling stops after birthing season to prevent other packs from finding the whelps. This is their song – and it communicates so many things to the outside world. It is not a sound of pain or distress.

Unfortunately for metalheads, dogs don’t appreciate hardcore as much. If you see your dog barking or getting agitated, turn the music off. Not all dogs care so much; if you don’t see him reacting at all, he probably doesn’t mind your choice in music.

While dogs generally like classical music it should be noted that not all classical music is “light.” Beethoven, for one, can be extremely raucous and loud – he was the rock star of his day. Some of his symphonies might not be to your dog’s liking but “Moonlight Sonata” will do just fine.

Some scientists believe that dogs are just as influenced by music as we are. Melancholy music will produce sadness, upbeat pop will do the opposite. On the other hand, as much as we love our dogs, their feelings about music are probably not as complex. Dogs are not as complicated – they like what is generally pleasing. If your dog doesn’t like any kind of music at all, it may be that he associates it with something negative. This often happens with rescued dogs who often bring a lot of emotional baggage into their new homes.

What Music Should I Play for My Dog?

It’s easy to see what our dogs like and dislike. Their actions give us a clear indication of what makes them ill at ease. Maybe you and your dog have differing views on what is acceptable music? You surely can come to a compromise. Nina Simone, Pink Floyd, Mozart, and the sounds of the ’80s are all great choices. In the event both of you can’t come to an agreement, just talk to your dog. He simply loves the sound of you cooing over him. That is the best music to his canine ears.

References:
Psychology Today: Do Dogs Have a Musical Sense?
Animal Wellness Magazine: Is Your Dog Extra Sensitive to Sound?