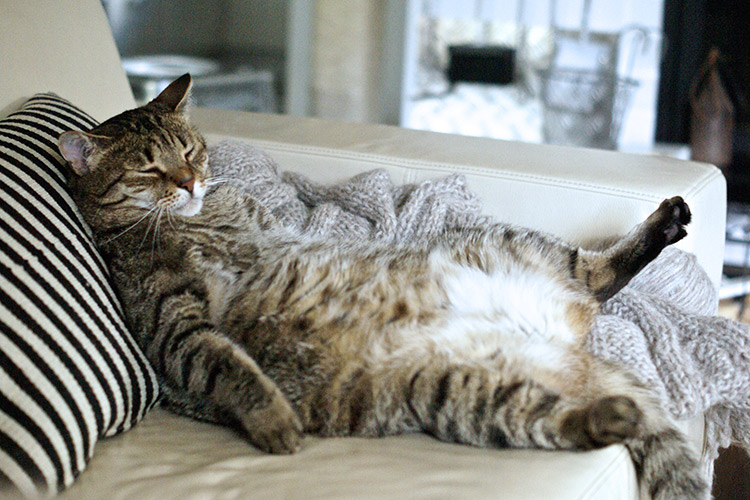 There is no “average” weight of a dog as the breeds determine this physical trait. Contrary to popular belief, cats can also differ dramatically in average weights, much of it having to do with breed. While the gap from smallest to largest is not as large within the feline population, they still do have a remarkable variety in sizes. With that said, within the 40+ officially recognized cat breeds, the average weight is somewhere between 7 and 10 pounds, with a small number outside of those ranges.

Size Is Just a Number

Your cat may indeed be at just the right weight. There are large-sized breeds whose average weight ranges from 12 to 20 pounds. Although many are not officially recognized, these breeds seem to be very distinct from their smaller counterparts. Any weight over 25 pounds might either indicate that your cat is morbidly obese – or was not meant to be a domesticated cat!

Large breeds that are officially recognized include the British shorthair, American shorthair, ragamuffin, Maine Coon, ragdoll, Norwegian forest cat, Persian, and American bobcat. Some of these breeds have longer-than-average hair making them look even more robust. Along with having more flesh, they have bigger, denser frames which add more mass than the average housecat. Another difference is that the larger breeds do not reach full maturity until they are two to three years old, whereas the smaller breeds usually reach their full size at 18 months. These sturdy cats also benefit from the longer lifespans that house cats have over dogs.

Unsurprisingly, male felines have a higher average weight than females. The weight and size differences aren’t always visually noticeable especially when you add hair and girth to their frames, but the males usually weigh about two to five pounds heavier.

The breed of the cat can play a small part. Some breeds are slimmer and lankier such as the Siamese. Some are more solid and rival the size of a medium dog! The Maine Coon is often cited as the largest cat, weighing in at an awesome 25 pounds, although many people have reported a sizeable 35 pounds. At the other end of the spectrum is the unbelievably adorable Singapura which can be a mere four pounds.

How Do I Know If My Cat Is Not Overweight?

Average weights should only be used as a guide. For a more accurate analysis, your veterinarian should have the final say. In most cases, people know if their cats need to shed a pound or two. Obesity has become a problem for house cats in America which can bump those average numbers higher. Overweight cats usually have a stomach that hangs lower than their chests. Their necks are often not as defined as a slimmer cat and their jowls may bulge out. A healthy cat will have a concave waist and a distinct neckline. A long haired cat’s figure is harder to discern so running your hands gently over his body will give you plenty of information. Since many of us have cats of no specific breed or have rescued homeless cats, the average weight chart is of no use. Using our eyes and sense of touch are a much better way to determine if our cat needs to be on a diet.