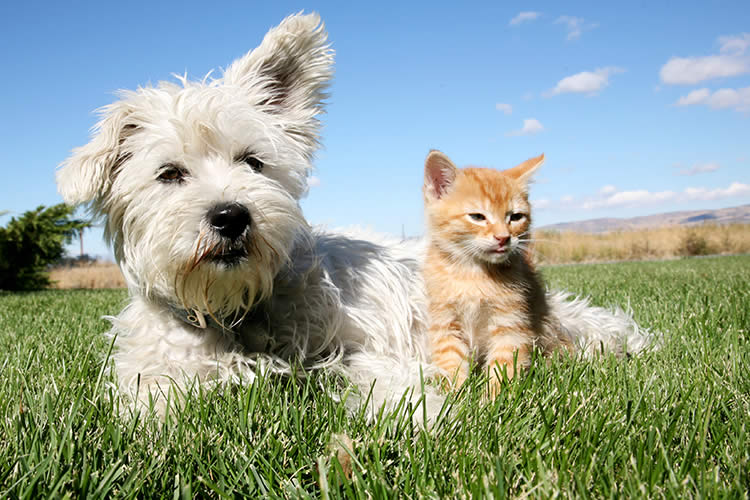 The short answer is that dogs have continually outsmarted cats in the IQ arena. However, it is difficult to discern how biased the research has been on this question. Much of the criteria used in the research has seemingly been based on the socially accepted norms of behavior in humans. Can we fairly use human standards to judge IQ in animals?

The Bigger the Brain…

Brain size alone does not determine the overall IQ of a species. Dogs, with their larger brains, are thought to be more intelligent than cats. This is an erroneous assumption because it is not only the size of the brain, but the ratio of the entire body mass to the brain mass that is a factor in determining IQ. Take, for example, the whale, with its 8,000 cubic centimeter brain, compared to our 1,300 cubic centimeter brain. While it is certainly tempting to elevate whales over humans in terms of IQ, we cannot logically make this statement true. It seems that many variables are involved, including brain to body ratio, number of neurons, density of neurons in specific areas of the brain, etc.

Scientists have come up with a hypothesis about the correlation between socialization and IQ. Dogs naturally are more social than cats, and thus researchers have tentatively concluded this may be why the canine team continually wins IQ competitions. To those of us who are not as erudite as these researchers, this may appear to be an imprecise analysis.

This is analogous to saying that the popular high school student is more intelligent than the chemistry student who likes to spend time alone solving equations. While the socialite may in fact be more intelligent (there isn’t enough information in this analogy to indicate otherwise), it would be premature to make such an assumption just based on the popular student’s proclivity towards socializing.

While cats may not know how to sit or beg on command, this may be more of a reflection on the human companion than on the cat. How much has the expectations of cats and dogs been ingrained into us? We stereotype cats as moody loners, and dogs as eager to please. Do these stereotypes affect how we interact with our pets? Maybe the cat would be more obedient, or learn new tricks if we had given them the chance to do so. It’s also worthy to ponder that cats outwardly do not care to please their humans. Could obstinate and singular personality traits be a sign of latent intelligence? Many might argue that a willingness to obey is actually a sign of lower intelligence.

Furthermore, the upbringing of cats and dogs is very important in how they interact with humans. Dogs who have lived as their lives as strays from birth can still integrate into human habitats. On the other hand, cats must be in contact with humans from an early age to be able to live peacefully in a human household. Feral cats did not have any human contact, which is why they cannot adjust to being rehomed. This major difference in the cat psyche may contribute to our perception of these creatures, and how we interrelate with them.

Even today, the human brain has so many mysteries, but researchers can directly communicate with their subjects. We cannot communicate with cats and dogs on a verbal level. Their emotions, their intelligence, and their thoughts are merely suppositions to us. Consequently, canine versus feline intelligence is a topic that will remain undefined for a long time to come.