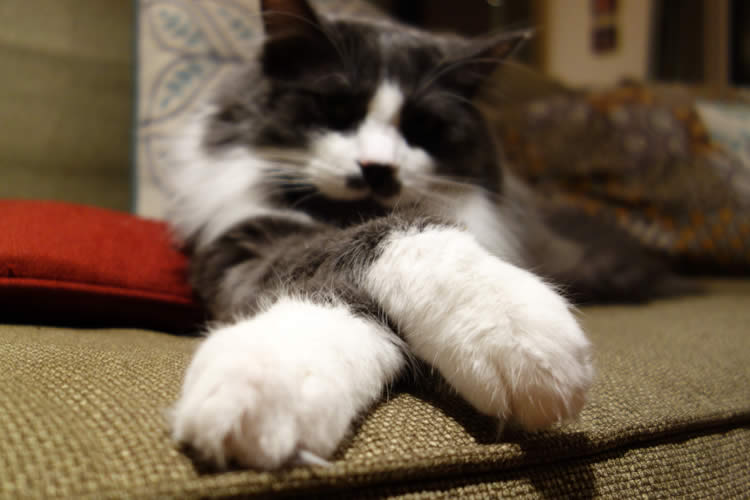 Many cat owners have complained that their cat is keeping them awake at night. This is a common complaint that’s not at all unusual because cats are mostly nocturnal animals. But being nocturnal isn’t necessarily the lifestyle adopted by every cat who may choose playtime around dusk or dawn or during the day rather than the night!

Diurnal (Day Cats)
Cats active during the day are probably no problem because they’re sleeping quietly with you at night instead of causing some trouble or making noise. My childhood cat, Mitz, was diurnal. He’d retire around 8PM and sleep through the night until around 5AM when my family awoke for daily activities. Animals active during daylight hours are called diurnal.

Crepuscular (Dusk or Dawn Cats)
Some cats sleep in the warmth of the day, stirring only when their family returns from work or school. These cats love combining the night with the day and they enjoy a lot of human interaction. Their agenda includes lounging around midday, avoiding the heat, and keeping their cool. Early morning and early evening is their time to thrive! These types of animals are known as being crepuscular, which differ from those being diurnal and nocturnal. Diurnal animals peak during the day and nocturnal at night. Take note that crepuscular cats sometimes don’t follow crepuscular rules as a moonlit night or cloudy dreary days can enchant your cat into committing some daytime mischief!

Nocturnal (Night Cats)
In the wild, the big cats are nocturnal hunters. Their eyes are designed to see in low light. Feral cats appear to be nocturnal as well. These were previously household cats that returned to their wild state when they were abandoned or slipped away from their owners. Unlike their big cousins, feral cats rely on some human contact in order to get food and rarely live specifically on hunting prey. If your cat displays nocturnal behavior, you can take solace in the fact that in some of those cats this behavior can be modified so your cat becomes more diurnal. By slightly shifting your cats schedule and by managing their environment you can accomplish the change from nocturnal to diurnal (but take note that some cats simply cannot or will not change).

Here are a few tips to aid you in altering your cat’s behavior:

Each cat is an individual unto itself, so not every cat will respond exactly the same. The important point to remember is to be persistent. If you allow your cat to disturb you at night or you reward them for doing so, this unwanted behavior will continue. But if this behavior continues and you’ve been persistent, certain medical problems may be the cause. A veterinarian visit may be in order.