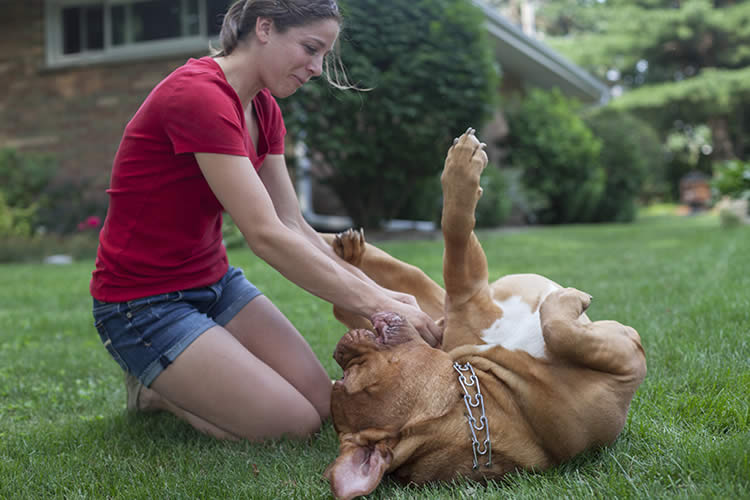 Did you know that there are two types of tickling? One type of tickling is called “knismesis” and the other type is known as “gargalesis.”

The form of tickling called “knismesis” is usually described as a light type of tickle which feels a bit itchy rather than the down in the gut tickling which results in eye watering laughter (known as “gargalesis”).

Knismesis is widespread among all animals mainly because it has been evolved into their behavior. It aids the animals with warding off dangerous beasties and insects such as spiders and scorpions.

So when you witness a horse shuddering and flicking its tail, know that knismesis is at work and that the lightest touch of an insect can elicit the ticklish knismetic response. Animals hate the creepy crawly feeling of bugs on their bodies!

The laughter tickle response known as “gargalesis” is a response which is much rarer in animals. In fact, only our closest primate relatives such as gorillas, chimpanzees, bonobos, and orangutans have been observed displaying this gut wrenching ticklish behavior which is thought to have been evolved into the great apes for social bonding purposes. Gargalesis may also have been a way for the younger animals to develop their self-defense skills by protecting their vulnerable rib and neck areas while being tickled.

Not all scientists are in agreement but over the past 10 years, scientific studies have led some scientists to believe that rats do exhibit gargalesis! Both neuroscientists and animal behaviorists have collected evidence suggesting rats do indeed laugh when being tickled! When touched in certain bodily areas, the rats response is to “chirp.” These high pitched chirps seem to signify joy. Furthermore, the rats will run the mazes or even press levers when they learn that their reward will be a good, satisfying tickle! So it seems, according to the scientists at Washington State University, that a chirp is as good as a laugh when comparing rats to humans! I wonder what other similarities rats have when being compared to humans?

The dog pant is also sometimes associated to the human laugh. Why? Well, when analyzing the pant using a sonogram, scientists found many varying bursts of frequencies. Played back to dogs in a shelter setting, these vocalizations initiated play, promoted social behavior, and decreased stress. Of course, all of these actions had been accompanied by a considerable amount of tail wagging!

Scientists can’t be 100% certain but they’ve noticed that dolphins have displayed some sort of laughter. Researchers in Sweden noticed some unusual sounds they hadn’t heard before during a dolphin study. Short bursts of pulses then a whistle were being made by dolphins during play-fighting but never during aggressive confrontations. Researchers believe these sounds were being made to indicate a pleasant situation which was non threatening.

Have you ever defused a tense situation by doing something silly to initiate laughter? Let me tell you, in most cases laughter does work to turn a frown upside down!

References:
LiveScience: Which Animals Are Ticklish?
Wikipedia: Laughter in Animals